Through what might be called sheer dumb luck (having the right connections at exactly the right time), I was hired to wrangle a crowd of extras at the Rascal Flatts concert last Friday, as well as their video shoot the previous night. What an awesome experience!

On Tuesday I met briefly with the producers (Steve and Michael) to discuss basics of what they needed and what would happen during the week. At first I freaked out a little on the inside when they said we'd be dealing with 1500 contest winners on Thursday (I was only hired to wrangle 50 extras!), but played it cool and it all got sorted out. As it turns out, we only needed to look through the crowd and select some of them to come to the front-of-stage area, we didn't have to wrangle all 1500. Whew! And if we didn't find enough folks on Thursday to fill the pit the way they wanted, my friend Matthew (through whom I got the job in the first place) would do extras casting and pull in talent from the outside for the real concert on Friday.

On Wednesday, I showed up for a 4 p.m. production meeting, which got pushed back to 6 p.m., and then finally at 8:45 got to meet with the director myself. During my time waiting for that meeting, I got to hang out and chat with other folks in the production office (set up in Xcel's dressing room #4), as well as meander through the Xcel backstage areas, and watch the lighting and sound rigs being assembled. Really cool. And I LOVED sitting in on the big production meeting - just a fly on the wall (or guy in the corner) while all the department heads talked scheduling and figured out details for the shoot. Inside I was freaking out a little, because I realized that now I'm playing with the big boys. But a façade of confidence goes a long way :) And really, this isn't *that* much different than the stuff I've produced (movies and theatre), just a lot larger scale. The basic concepts are all the same.

Thursday got exciting. Over 1000 radio contest winners showed up to watch the Rascal Flatts rehearsal. While the crowd was still waiting outside the gates (apparently some people got there at 9:30 a.m.!), the producers and I started wandering through and picking out folks to come to the "mosh pits" at the front of the stage. And of course, as soon as you give one person a wristband, everyone near them wants to be picked as well. Which creates very awkward situations when the other people either don't fit the demographic, or are just plain demanding and pushy.

Human behavior confuses me in this situation: everyone there on Thursday night was already a winner (from the radio contest), and they were already getting in FOR FREE to watch the rehearsal (twice!), so essentially it's a free concert. But as soon as someone saw me handing out wristbands, a sense of entitlement kicked in, and then they got angry when I couldn't give them a wristband. I wasn't prepared for that. I got used to it, but it definitely caught me off-guard at the beginning.

On the other hand, there were some people I wristbanded who were absolutely ecstatic. As in, I'm pretty sure getting picked was the highlight of their year. That was an awesome feeling for me, to know that this *gift* was truly, deeply appreciated. Those are the kind of people you want to help out as much as you can, because they weren't expecting anything, and then were overjoyed to be chosen. Seeing those reactions made my night.

Once we had the pits filled, I chatted with a couple Xcel security guards, heard some great stories, then went backstage to meet with the producers and chime in on headshot selections for people to fill in the pit on Friday.

I waited while one of the producers finished his phone call. It was a very emotional conversation, a recent death in the family, and how he was dealing. When he hung up I swallowed my fear and asked if I could pray for him. Relief visibly washed over him, he said yes, and so right there in the production office, I put my hand on his shoulder and prayed. I said Amen, and he gave me a huge hug. I had no idea words could have such power.

I got to help pick some of the people for Friday. In that, I pointed at a couple pictures, and then the producers either agreed or disagreed. Then I went back out to the side of the stage and watched the concert. The guys on the stage were cool, but my heroes, the folks I really wish I could have met, were the techno-jib and techno-crane operators. Because I'm a nerd, deal with it.

When rehearsal ended, we asked a few people to come back again Friday night and gave them a wristband that would let them in. The very first group I approached were absolutely delighted - again, the kind of people I loved being able to give something to, because it made their day.

So on Friday, I showed up early, we walked through the holding location and path from there to the stage, then set up a check-in table outside the ticketing area. A small crowd of our talent was already there waiting for us. The next two hours were mostly "hurry up and wait" for the rest of our people to show up. But Steve and I had a good conversation about faith, so time well spent. And it was exciting to see familiar faces from the previous night as they showed up. In case there was any doubt how useful my iPhone's hands-free headphone/microphone thingy is, it was dispelled quickly, because I took quite a few phone calls from talent who were either running late or looking for the right door, etc.

The concert started, and a bunch of people were unhappy that we were keeping them in a holding area (the Xcel's press level, up high but you can still see the stage) rather than down on the floor. The rationale being that we needed them to remain energetic for the Rascal Flatts' performance, because that was the only one being taped. There was literally nothing I could do about it, though, so I let it all roll off my back. As long as I was doing my job (wrangling), that's all I needed to worry about.

Part-way into the second opener we divided our group into two sides, then brought them downstairs into a hallway on the stage level. Once the second act finished, we had only a few minutes to bring our people up to the front and place them for the cameras. Fortunately that went very smoothly. The producers and I hopped onto the stage and started pointing at people and moving them around, handing out glowsticks, and filling in the gaps. The whole evening had been a constant back and forth: do we have enough people? Too many? Turns out we needed a few more, so Michael handed me a bunch of wristbands and sent me on a quest into the audience to grab more "pretty people". That was intense. "You! Who are you with? These 4? Do you want to be at the front of the stage? Okay, here, take these wristbands, go to the right side, and hurry please!"

Somewhere along the way I'd learned the tickets for the pit area sold for $113 a piece. Now granted, we were only putting our people there for the Rascal Flatts performance and not the opening two acts, but still, that's quite something when you realize you're handing out these wristbands for free. Not that I want to tell people, "be grateful!" But you'd hope they would be if they knew how much they'd just been gifted.

We finished placing bodies, and then we were done. My job was done! I'd survived! And in retrospect I realized something else really really really cool. Years ago, at a concert at the Xcel, I distinctly remember saying "some day, I'm going to be on that stage". Now at the time I meant as a performer, and that may or may not ever happen. But tonight, technically speaking, I stood on that stage for a couple minutes. Cool.

During the show, Steve took me back to the production trailer - I got to see all the live video feeds, watch as the director called out different cameras to switch between, listened to the lighting/FX guy talk about dialing down the haze, talked with the audio guy as he monitored recording levels, etc. It. Was. Sweet.

A little later I spent some time chatting with the craft services lady, Dawn. With 65 television crew, we had our own dedicated craft services lady, and she made/brought in delicious meals and snacks. And she was super friendly. She's local, so I hope one day to hire her for one of my movies.

I took a couple photos during the show, but unlike what I saw many people doing, when I was out by the stage I tried to look at the sights directly, rather than through my camera's lens. The pictures I took were to prove I was there, but the memories are more precious.

There are so many "best" parts of the entire experience: I got paid to do something I love. It's a great resumé item for me. I saw much of the Xcel's backstage area and one day even got to park in the loading dock. I saw how a "real" production works from close up. But I think most of all, I met some really amazing people along the way. I'm convinced God orchestrated those meet-ups.

One other cool story: I was in awe to see Tsvi, the production coordinator, take off at sundown before the show started. He's Jewish, as in, really kosher Jewish, and so at Friday sunset he sabbaths - he took off and I didn't see him again. Seeing someone that high up in the production putting faith above work was inspirational to me.

Once the concert was over, about 50 stage hands rushed into the arena from both sides of the stage, pushing crates, coiling cables, cleaning up. And I mean immediately. As soon as the last note was played from the stage, the crew was already tearing down. I've rarely seen such efficiency and teamwork! And then I realized I was in the way, so I skid-addled.

I said my goodbyes, then took off for Des Moines (Awaken weekend - I was technically supposed to be there Friday at 6:30, but they were understanding). Very glad I planned ahead and parked right by the exit in the parking ramp, because even at that it took me over 15 minutes to get out.

Oddly, after only a few days working for this concert event, I still felt some post-production depression as I drove. It took me a while to figure out why I was so sad all of a sudden. But knowing I was heading to Awaken helped, as did the fact that pretty soon I was too tired to feel sad anymore!)

Wow. You really can't buy an experience like this. :) 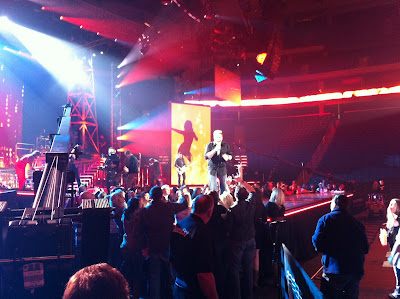 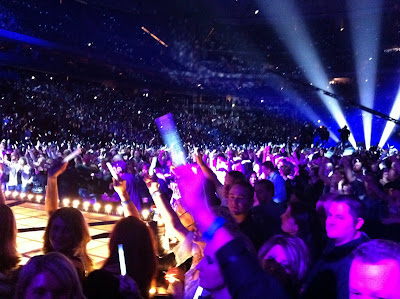 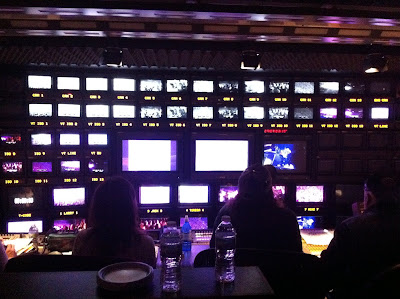 Posted by Jeremy Gustafson at 11:09 AM

So THAT's what that weekend was all about. What a great experience - on many levels!