Quick rundown of the day:

Went to bed at 8:30 last night, slept light (unfortunately) and woke up a little after 4 this morning, before my alarm. Thinking "surely the line can't be that long", I found my first ever use for Twitter: I searched for WWDC to see if anyone had tweeted from in the line. Sure enough, people had, and sure enough, there was already video of the line, wrapped around the block. Dang. I got dressed, ate my breakfast I'd bought to-go last night, and hurried down there. I arrived in line at 5:10, and was physically at almost the exact same spot as last year... when I'd gotten there at 6:20. Bunch of crazies, I tell you! And I was happy to be one of them. The first guy in line apparently camped out since before 7 p.m. last night. I'm glad I wasn't him.

As someone nearby me said, "you [Apple] can't buy this kind of publicity".

About 6 o'clock, the line started compressing, so we moved forward an entire city block, from halfway along the 3rd side of the building past the halfway mark on the 2nd side. My line-mates were very friendly, we all got along well.

AT&T's wireless became slower and slower as the morning progressed, to the point of being near unusable. Not that it's very useable to begin with, but it's even worse when hundreds of other people within a one-block radius are using the same connection.

It was cold, and a lot of standing. 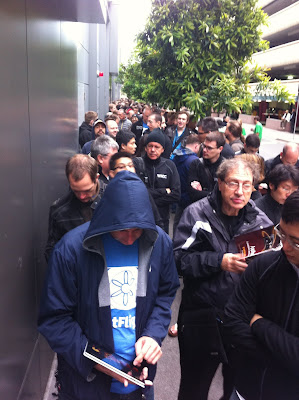 A 8, they opened the building, by 8:12 I was inside. We got to second floor, and had time to eat, drink, and potty. At 9:35 they let us ascend to the Presidio (the giant room for the Stevenote). Photos of that in my other post.

Then lunch, then afternoon sessions (which I can't talk about), then I visited one of the labs and talked to an engineer to get pointed in the right direction on porting my iPhone app over to iPad.

Went to dinner at a nice Italian restaurant I discovered last year (and by discovered, I mean a homeless man actually recommended it to me, and I gotta say, he had good taste). Then meandered to an after-hours unofficial party - there are quite the handful of these all week. Got there early enough to get a free drink ticket, and a cool cup that lights up. But I boogied pretty soon after I finished my alcohol, because it was ridiculously crowded and that's just not my scene. And I didn't feel like waiting awkwardly for another hour and a half before the live music started.

Now I'm back in my room, settling in to watch a WWDC session from last year (on the recommendation of the engineer).
Posted by Jeremy Gustafson at 10:28 PM