Aka, "when you think it can't get worse, you're wrong."

Murphy took a dump on my house's plumbing mid-October. It all started innocently enough: shortly after midnight on Sunday night / Monday morning, I noticed a small pool of water around the basement floor drain. As far as I could tell, not raw sewage, just accumulated H20 from the de-humidifier and the furnace drainage tubes. I mopped it up, and emailed the plumbing company we've used in the past. I also emailed my boss and let him know I'd have to work from home Monday morning while I waited on the plumber.

The plumbing company called me bright and early, and said they could have a guy out there that morning. Whew! Good.

He showed up on time, we found the main line access, and he started snaking out the line. Meanwhile, I moved my computer upstairs to work, because once he opened up that access pipe, an awesome smell began permeating the basement.

Zach the plumber was great - he was friendly, explained everything clearly, and kept me updated on his progress. Unfortunately his progress was slower than he'd hoped: he was pulling out, in his words, more tree roots than he ever seen. So it was going to take more than the one-hour he'd originally quoted. "That's fine," I said. "Do what you need to do."

He ran his snake out a half dozen times, pulling more and more roots off each time it came back, and then... it got stuck. No going forward, no going back.

What does that mean?

Well, first it meant having another plumber dude come out with a camera, to sneak a peak at the pipe and see why the snake was stuck. The camera was an additional $200ish (on top of the plumber's original $99/hour). They discovered the pipe was completely filled with roots, and that the bottom had rusted or somehow dissolved away almost completely, so it would need to be replaced.

Zach got on the phone with his office, and within hours a series of trucks started arriving: one to paint and flag the gas line, one to mark ... I don't know, something else, and so on. Then the giant backhoe arrived with a digging crew, and they dug a ten-foot-deep hole in my front yard. The cost? $4,500. (they did at least deduct what I'd already paid for the morning's plumbing work).

Meanwhile I'm still trying to get work done. Email my boss and tell him I'll be stuck at home all day with this catastrophe. Also called my parents and kept them in the loop.

The hole got dug, a giant pile of dirt appeared over the rest of my lawn, and my 4-year-old neighbor and her grandma parked their chairs out front to watch all the action.

By evening, the digging crew couldn't quite dig deep enough, and so told me they would have to come back the next day with a different backhoe that could go further. They put metal barrier walls in the hole and covered it up so no one could fall in, then left.

Next day I went to work; the plumbers came, dug, and then called me with the cheery news that they would need to dig a second hole, under the sidewalk, to replace a second section of pipe that was also broken because of the invasive roots. This would double the price to a total of $9,000.

At this point, I called Dad and said, in so many words, "Your turn, I don't trust myself to deal with this anymore." He and the plumber talked, approved the work, and the company started getting more city permits in order to dig up the sidewalk. Because it was late in the day, they weren't able to get approvals to start that night, and had to wait until Wednesday. However on the plus side by this time they'd freed the first plumber's snake, so he could get that out of my basement. And they'd unclogged from the yard to the house, so at least we could use water again, though sparingly. "Military showers" and minimal flushing were the rules.

Wednesday... nothing happened. The crews must have been dealing with even larger emergencies, because they weren't at my house.

Thursday when I came home from work I had a second giant hole, this one in the middle of the sidewalk. That day they successfully replaced both sections of pipe, and used an extremely-high-pressure thingy (technical term) to blow out all the roots in the line. We could once again use water in abundance! Showers, laundry, dishes, toilets, sinks, LOTS OF WATER!

End of story, we lived happily ever after.

I wish. This story's only half done.

The city inspector couldn't make it out until Friday morning, so the crew covered both holes again, and came back Friday to "backfill" - put all the dirt back into the holes.

But Thursday night, after taking my first shower in several days, I found a 1" LAKE of water in my downstairs bathroom. Leaking from the ceiling.

I called my parents, and started mopping. At least the drain worked this time, so I didn't have to fill a bucket and lug it outside. Mom and Dad showed up, and my friend Peter, who I'd planned to hang out with that night, also came and helped out. Dad turned off the electricity to the bathroom, pulled out the heating / fan unit in the ceiling, and identified the source of the leak as the pipe leading to the outdoor water spicket. Fortunately, this meant it wasn't the upstairs bathroom leaking again. (a few months ago we'd just had the tub replaced because it was leaking into the basement - another costly venture).

We put a cup under the pipe and I emailed the pluming company again. Parents went home, Peter and I hung out, I went to bed exhausted. On top of the plumbing chaos, my two co-workers who are the resident experts on the software I am charged with testing, were both on vacation that week. And there were lots and lots of bugs in the software. And a new site was just going into acceptance, and needed that software. Trial by fire, and I rocked it! But still: long week.

Friday afternoon a different plumber came to look at the bathroom ceiling pipe. Embarrassingly, all he did was tighten a nut. Though he refused to concede, my / my parents hypothesis is that, when the digging crew high-pressured out the roots from the main line, some of that pressure came back into the house, through the slightly loose nut, and flooded the bathroom. Because the total amount of water that leaked overnight was minuscule compared to what was on the floor Thursday evening. In any case, the plumbing company didn't charge us for the extra trip, which (since I'm still sure they caused it) was the right thing to do.

Now, let's talk about the state of my yard. When the crew left Friday evening, in my yard I had: two giant mounts of dirt where the holes used to be, two missing panels of sidewalk, yellow marker flags left from the gas line guy, wooden retaining beams askew, a blue glove left over from a worker, and clay all over the sidewalk. I mean ALL over the sidewalk. And, to top that off: no communication whatsoever from the company about when this giant mess would be cleaned up. For $9,000, I expected more. I was pissed.

My parents came by and reassured me they [the plumbing company] couldn't possibly leave the yard like this, and that the crew must be coming back Monday to finish up. It was late Friday, after all. Okay, fine, I'll buy that. I mean, I was still mad they were leaving it in this embarrassing state over the weekend, but, if they come Monday and make it right, that's okay.

Monday I got home from work and... nothing had changed. I called the company and asked when the cleanup crew was coming. They had Zach, my original plumber and apparently the point person for the entire project, call me back, and he asked if they hadn't filled in the holes? I explained yes, they did the backfill, but everything was a mess. He explained the mounds of dirt need months to settle - okay, I'll accept that, but I asked for them to clean up the rest of the mess. Ugh. Long story short, he had a supervisor come out that week, who agreed it was kind of messy, and said they'd send some people to do something about it. My parents' largest concern was the sidewalk, with Halloween coming up it presented quite the tripping hazard.

Then I went to LA for a week and a half, and when I came back... hardly anything had changed. They filled in the sidewalk a little better, enough so it's not a major issue until the city comes to pour new concrete. But all the other issues were not addressed.

In the end I hired a friend to do some cleanup, and then spent half an hour out there with a hose spraying the clay and dirt off the sidewalk. I got most of it looking decent.

I sent a letter of complaint to the plumbing company last night, and Zach called back within a few hours. I re-explained the situation to him, particularly emphasizing how, when we used this company to replace the tub, our plumber was exceptionally consciencsious about cleaning up after himself inside the house, vacuuming, leaving it better than he found it, etc. For $9,000, I expected the same or better from the outside crew, but they blatantly didn't even try. Zach said he'd pass this along to his manager. I doubt anything will come of it; they probably think I'm just a huge whiner. I don't think I'm whining, I've taken great care to speak facts, but I just find their behavior unconscionable.

On the plus side. At least all the house plumbing is working swell. 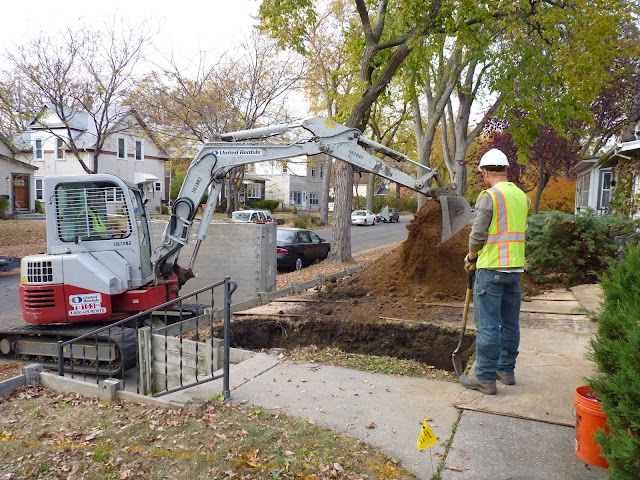 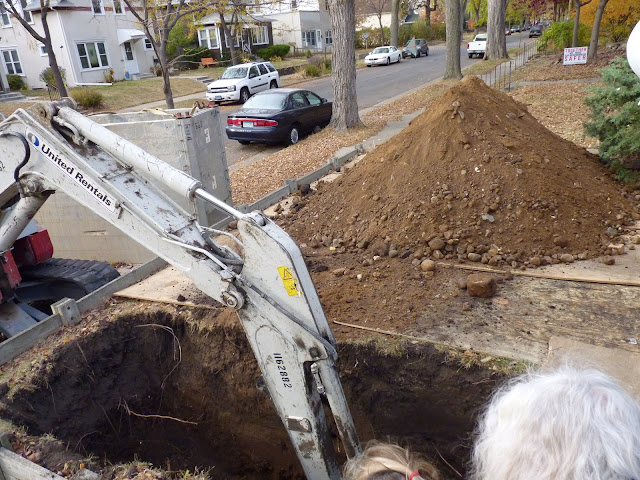 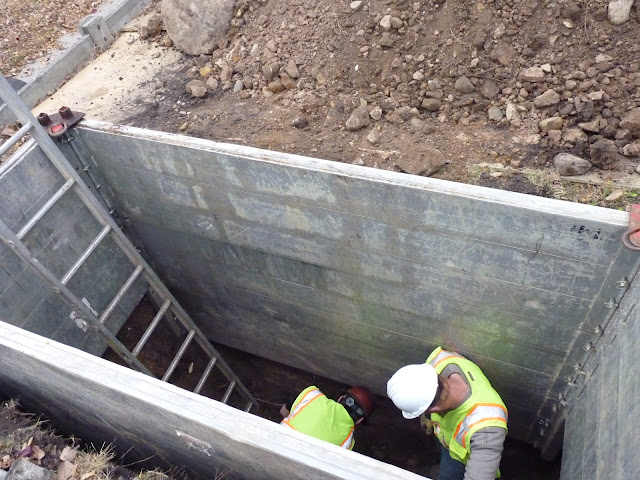 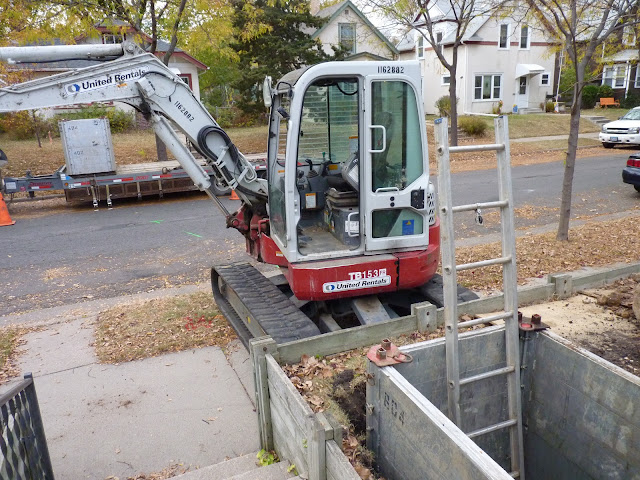 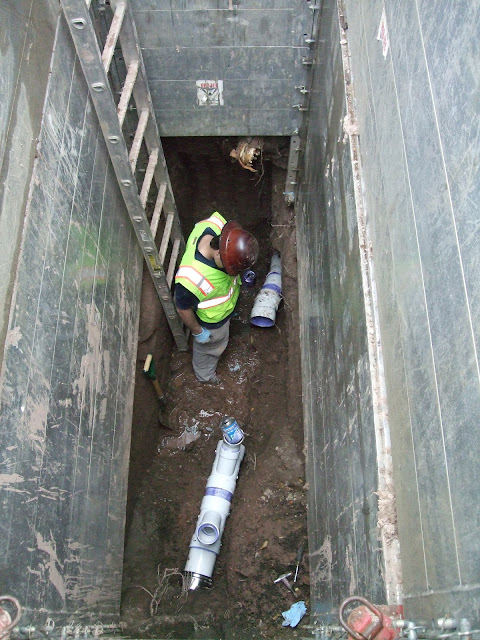 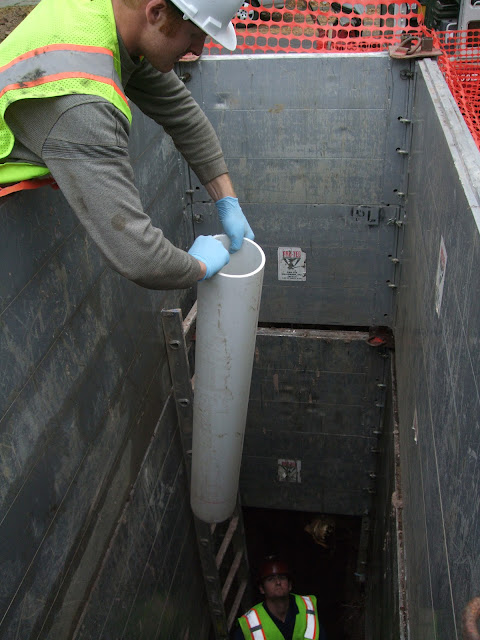 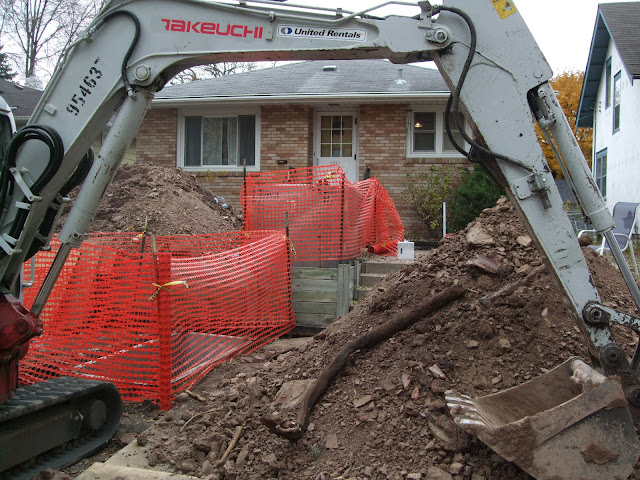 Posted by Jeremy Gustafson at 1:31 PM

Email ThisBlogThis!Share to TwitterShare to FacebookShare to Pinterest
Labels: Joys of Homeownership

Ahhh! Such stories you tell! Can all this possibly be true? Well, okay, I guess the pictures are worth a thousand words. :}

Yup, Jeremy,your moles are definitely worse than our Ohio moles. So sorry for your problems. Aunt Judi

Honestly, I think you’ve been ripped off. Your plumber should have told you to get the necessary permits before they started working on your lawn. Finding the pipes shouldn’t have been as hard if they had asked for the original plumbing plan of your house.

I don't disagree about being ripped off, though some factual corrections: they had no issue finding the pipes, and they took care of getting all the permits. Those weren't the issues that frustrate me about the experience.