Alissa and my two-year anniversary was Sunday, and because I'm rather proud of the gifts I made for her, I thought I'd write a short post to brag. 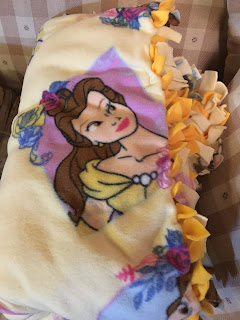 The second gift is the one over which I'm really giddy: 3D-printed bunnies, hand-painted to look like our real ones: 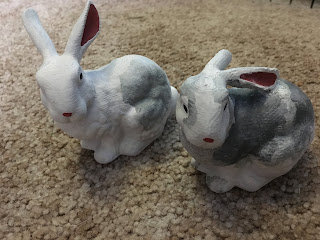 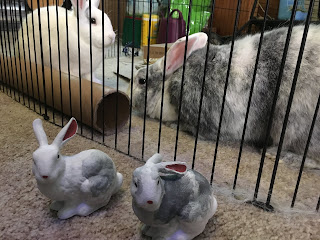 My Dad got a 3D printer a year or two ago, and has been printing up a storm of 3D gifts ever since. Inspired by his 3D printing, I bought my own printer (a Creality CR-10, for anyone interested) a couple months ago and have been printing my own storm: various accessories for board games I play, as well as decorations for Alissa's classroom (specifically: a TARDIS, a couple elephants [school mascot] and an apple), and other miscellaneous stuff. 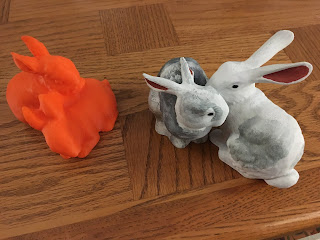 A couple weeks ago I found some cute bunny designs on Thingiverse.com and printed those; I gave Alissa the first one as an impromptu gift, which she loved and immediately placed on display near our bunnies' cage. Then I got to thinking about printing another set and painting them to look like ours.

My miniature painting hobby was inspired a year and a half ago after I discovered Sorastro's Star Wars: Imperial Assault painting tutorials on YouTube. Imperial Assault is one of my most favorite board games, and excited by the prospect of painting my miniatures (and by how easy Sorastro made it look), I started investing in paints. I'll post photos of my painted minis sometime, because I'm pretty happy with how most of them have turned out. But, point being: I had all the requisite paints for the 3D bunnies.

The trickiest part was getting a reasonable color for the ears - I never could quite match the bunnies' iridescent pink/salmon-ish color, so settled for the slightly more deep pink/reddish color you see in the photos. The other tricky bit was feathering the gray patches of fur, so there weren't stark lines of white vs gray. After painting the gray splotches (using a slightly darker gray for Daisy's fur than Luke's), some rough dry-brushing with a white dry paint did the trick. After spraying with a protective matte varnish, I also applied a gloss varnish to the eyes and noses. It was a fun little project and even more fun being able to surprise Alissa with these cute little critters :)

Posted by Jeremy Gustafson at 10:39 AM

So cute! And they look very close to the real thing!