I went to jail (just for a visit, don't worry).

eHarmony dumped me before I could even sign up.

My friend Alee's parents hosted a 4th of July party, which was in itself a lot of fun. But the remarkable moment of the day came when, in the late afternoon, a bunch of us were sitting out on the lawn and someone asked what time it was. Why is that a big deal? Because I didn't know. We'd been playing water volleyball, so I didn't have my phone on me, I wasn't connected to the outside world, and that was okay. Even more, I'd just finished the database project four days earlier, so I didn't have work waiting for me, and so I didn't need to know what time it was, because I had no where else to be and nothing else to do. It. was. beautiful.

July 5th, one of my friends from church, a seminarian who inspires me, got married, so I got to hang out with my pastor and some other church friends at the wedding and reception.

The next morning I trekked down to Des Moines for friend Jessie's birthday celebration that evening. Had some good phone conversations with friends around the country while I drove. And I have marked in my calendar that this is the day I started thinking about getting a tattoo. (don't worry Mom, I haven't acted on this yet!) For years I've thought, sure, I could see myself getting a tattoo, but only if the right idea comes along - I'm not going to get one just for the sake of getting one. The idea I have now is the word "Hope" on my left wrist, so that I could see it often and be reminded. It's an idea. Haven't made any permanent decisions yet.

After months of hearing positive stories from friends about how their therapists have challenged them, I finally rang a woman named Beverly, who was recommended to me by a trusted friend and mentor. Our first session was July 9, and of course me being me, I went in with a long list of issues we could work on (things like my fear of disappointing people, fear of failure, need for affirmation / validation, need to control / perfectionism, workaholism, etc). We've been meeting every week or two since, and Beverly's given me a lot of solid, practical advice. I take notes every meeting so I can re-read them throughout the week. So, one specific example, with regards to me being a perfectionist: "You've made this 'I have to do perfectly' thought process into an idol. It's not helping you become a better person or a more Godly person. Being a perfectionist is unattainable and you will fail. You cannot be perfect. And you're not going to be a sloth just because you're not perfect." Practical reminders that I try to review every day.

That weekend my friend Matt invited a few of us over to play with Legos. Yes. That's right. A bunch of 27-31 year-olds, building Lego buildings. It was so much fun!! Check out more photos from my Facebook profile. (the last photo here is the product of four Lego nights so far) 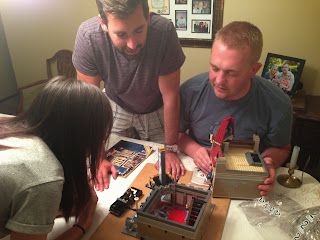 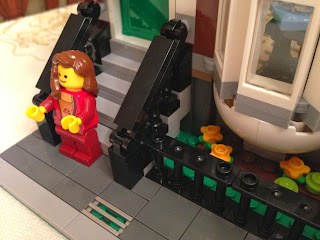 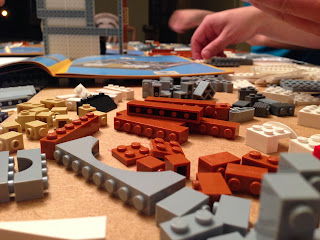 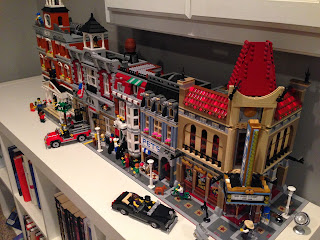 The next morning my friend Cathleen and I visited Life21, the church in Northfield where I had played guitar and led the worship team for a few months after college (5 years ago! I'm old). It's a tiny congregation, but they have such passion for God, and no inhibition about expressing it. Their worship is from the heart. I was humbled and flattered that so many of them still remembered me; I was greeted with hugs, and it felt like I was coming home after a long trip. The pastor even mentioned me in his sermon - I hadn't thought I'd made that much of an impact, but I guess I did. I love my current churches, but I do also miss Life21. Those are good people.

Next weekend, I had an incredibly awkward mostly-blind date with someone from the dating site I've been on, christianmingle. I got there early and brought a book to pass the time, figuring that, since she had a toddler, she might run late. An hour later, she texts me that they're finally at the park. What I didn't anticipate is that when I told her "I'm by the playground," there would be four other playgrounds in the same park! We found each other eventually, and by about 30 seconds in it was clear we not only had very little in common, but worse, very little even to talk about. I learned several important lessons here. For example: have plans to be somewhere at a certain time, so there's a definitive "out" point. And, perhaps, chat a little more on the phone or via text first, before meeting face to face. I mean, she was friendly and all, just, nothing really in common. Live and learn.

That same day, July 20, I reached... drumroll... the Zero Inbox. Zero messages in my email inbox. If you don't understand, this is a big deal. And I've more or less maintained it since. Not 100% of the time, but I don't think I've let any message lapse more than 4 days.

Friday, July 26th was the annual System Administrator Appreciation Day, and so a dozen+ of us sysadmins from work went out for lunch together at a really deluxe pasta buffet, compliments of our managers. I'll be writing more about Cray later, but suffice it to say, I really like my job, and the people I get to work with.

That evening, after being invited each year for the past several years, I finally made it to my friend John's "Lost Weekend" party. His wife takes the kids out of town and John gets the whole weekend to hang out with his friends, during which they eat lots of "healthy" food, play Rock Band and board games and so on. Being an only child I've always gotten along better with people older than I am, so hanging out with the 40-year-old guys was really fun!

Saturday, July 27th, after almost a month of beta-testing and bug-fixing, I officially launched the Samaritan Casting online database. By the end of that day we had over 140 registered users, and on September 12th, over 1000. Yes. One thousand. In less than 7 weeks. That's pretty darn cool, I think. More about the database later.

Also on July 27th, I did something I don't think I've done in literally years: I worked on songwriting. More specifically I sorted through dozens (hundreds?) of voice notes about songs I wanted to write, random text snippets, "todo" folders nested within other "todo" folders, etc. It was one of those "when I have time" projects, and... I finally had spare time!!! Can I get an amen?!
Posted by Jeremy Gustafson at 10:09 AM