Tenth Avenue North plays a song entitled “By Your Side,” which has been quite popular on mainstream Christian radio of late. It’s also been popular in my personal iTunes collection, and also the iTunes playlists of at least two of my closest friends.

The song has been on the forefront of my mind because the lyrics really speak to me, as in, directly to me and my life circumstances (if you aren’t familiar with the song, Google for the lyrics).


I too often find myself doing things out of obligation to God, and not in a good way, but a "trying to earn grace" way (first verse).

Especially as concerns romantic relationships, I've a strong history of impatience and not letting God simply be enough for where I'm at (second verse).

Even in the midst of my faith struggle, which occupied the entirety of my senior year of college, I know Jesus/God was right by my side, walking along my road as He did with the disciples on the road to Emmaus (I acknowledged this even in my senior chapel speech, while I was still on that journey) - that belief is at the core of the chorus.

And drawing all these together, I constantly find myself in need of the reminder that God loves me. I know it academically, but to feel it emotionally is another matter. Therein plays the song’s bridge, and the comfort in knowing that no matter how badly I may sometimes screw up, no matter if I “get it” when it comes to so many theologically-based questions or not, God’s love is constant, and nothing I can do will change that.

Today, on my way back to work from lunch, I crooned along with the radio (as I normally do), but this time I changed the words around a little bit. There’s a danger of making songs “all about me,” but in this case, I think it’s perhaps fitting if only as that reminder to my own heart. If you’re so inclined, you might also give it a try sometime - changing the lyrics can have a profound effect on the song’s effect on your heart:


Why am I striving these days?
Why am I still trying to earn grace?
Why am I crying?
I’ll let You lift up my face
I won’t turn away

I’m at the final Awaken attack before we start tour next month; during large group time we were asked the question: ‘what one word or phrase would you want to be remembered by after you die?’ It may be something you already feel you’ve achieved, or something you strive for. After you answer the question, three others from the group (whoever feels moved) respond, affirming you, or challenging you, in how they’ve perceived your eulogy in your life already.

While I’ve many ideas of individual particulars for which I wish to be remembered, narrowing those down into one single word proved difficult. The word that came to mind, though, was “minister.”

“Minister” could mean so many things, but my primary focus is on people: I want to be remembered for putting friends above work, for caring, for taking note when someone’s having a bad day and then taking time to listen or write them a card. I want to be remembered as someone who gave of himself because it was the right thing to do (as one small example: giving/lending money to a friend, not because I have to, not because they expected me to, but because I wanted to, because in my mind that’s just what needed to happen). I want to strive to go above and beyond societal expectations, and I refuse to lower my expectations just because society doesn’t place as high a value on this aspect of caring.

Lastly, I want to be the friend who shows up. Showing up, in my mind, is so much more important that anything else you can do. My favorite example is in the book of Job. Everyone harps on Job’s friends for unjustly accusing Job (and rightly so, they were most definitely in the wrong); but what’s rarely noted is what they did right: they showed up. In fact, the story says they sat with him in silence for an entire week! Even if there aren’t words to be said, even if there’s no action to be done, showing up, in my mind, remains the most powerful form of ministry there is.

Do I think Job ever really existed? No, of course not, but the moral of that story remains powerful, and, in my life, persuasive.
Posted by Jeremy Gustafson at 10:13 AM No comments: 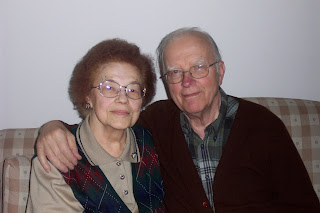 Grandpa’s funeral service was last Sunday, December 28th, 2008, at Christ Church Lutheran in Minneapolis, where he was a life-long member.

My Aunt Judi, Uncle Dave, and cousins Krista and David flew in Friday night and stayed at my house for the weekend; Saturday was spent picking out items and photos for the visitation display, as well as simply having time together as a family.

Sunday morning I went to church, then met the rest of the family at the mortuary for a private “viewing”, I suppose you’d call it. This was the first time any of us, my Mom and Dad and I included, had seen Grandpa since he died. I’ll publicly admit, I was greedy; though I respectfully yielded to my elders in entering the room, when they dilly-dallied near the entrance I quickly advanced toward the casket to be the first person to see Grandpa.

Honestly, this came to me as a shock, because both Grandma Sue and Grandma Ruth had looked very much themselves in their caskets three years ago. But this day, there was a kindly, but very generic looking, older gentleman lying there. It didn’t look like him at all. I’m still bothered, and disappointed, by this, because frankly it’s difficult to find closure when you’re not even sure you’re burying the right person.

Pastor Carlson put a positive spin on this for me later that day, offering a story from when her kids were younger and their Grandpa had died; apparently he didn’t look like himself, either, but she used that moment to remind her children that this was only Grandpa’s body; the essence of what made Grandpa Grandpa was no longer contained within, and this body was no longer their Grandfather.

Nevertheless, a week later I still feel a lack of complete closure.

After viewing the casket at the mortuary we proceeded to the church, I hopped into my suit and tie (which I tied well enough on the very first try, thank you very much!), and I stood my guitar at the front of the church. As I rehearsed my two songs that I would play, Grandpa was brought in the back of the church; though unplanned, it seemed quite appropriate, and moving, that the music was playing while he came in.

Ever since I wrote my first song a year and a half ago, I had planned on writing a song to play at Grandpa’s funeral, a tribute to both him and Grandma. Unfortunately, time ran out before I’d really even started, so in the initial days of funeral planning I proposed the next best thing: a song by Mark Schultz called “Walking Her Home”, the lyrics of which more or less perfectly describe my Grandparents’ love story. I changed only three numbers in the song to make the details specific to Grandma and Grandpa, but the essence of the song fit them perfectly as-is. I played that song as the service opener before the greeting, and many people were surprised to learn (after the service) that I hadn’t written it, that’s really how perfectly it described Grandma and Grandpa.

After an emotional conversation with my parents on Christmas night, I wasn’t satisfied not having a song as part of the “Remembrances” section in the service (when my Uncle Alan and cousin Krista shared stories and a poem about Grandpa), so that night I went home and wrote a brand new song to sing during that portion of the service. I based it off of a story Mom had told about Grandpa’s vision of what going to heaven might look like, ‘finishing the race’ with people on both sides of him applauding and cheering. It’s a cool picture. That was the fastest I’ve ever written a song, but in all honesty I think it’s one of my better ones. I got my wish and was allowed to play it after Alan and Krista shared. The lyrics are posted below.

I’ve been struggling a lot recently with "me worship," I’ve become jaded, and have had difficulty separating out the “performance” aspect of playing guitar and leading. That’s the short version, and so I was worried about how this might affect me at Grandpa’s funeral. Playing in front of a crowd, done that plenty now, not a problem; but playing with a heart of tribute and dedication, making the songs worthy of Grandpa and Grandma, that was the real struggle. I think I succeeded. Particularly as I played through the final instrumental chorus of “In Heaven Now,” it felt right, there was no doubt that was exactly where I was supposed to be right then, doing exactly what I was doing; it was a tribute, Grandpa deserved nothing less.

My final note from the service itself is something I will cherish as one of my most valuable memories ever. When we planned the service, I suggested it would be both appropriate and very special if the choir could recess following the family. Grandpa sang in the choir for 71 years, in my mind, having them as his ‘honor guard’ on the way out could not have been more perfect. At the end of the actual service, when the family reached the back of the church following the casket, I glanced up the aisle briefly and found myself in true awe. On an average Sunday, the CCL choir has maybe 8 or so people; this Sunday, for Grandpa’s funeral, there were at least 30 to 40 current and former church members in white choir robes following the family. Wow. Neither Mom nor I had a camera, but I’ve tried to burn that image in my memory forever, it was so powerful; that’s a lot of people who were there to honor Grandpa. Truly Awe-some. 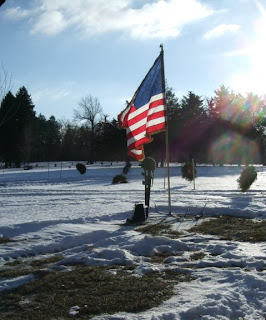 Cemeteries don’t do burials on Sunday, so Grandpa was buried Monday morning. For my third and final time, I was privileged to drive a vehicle in my Grandparent’s procession (though this time we met at the cemetery, so the drive was significantly shorter than the previous times). I also was privileged both Sunday and Monday to serve as one of Grandpa’s pall-bearers.

Grandpa Ray served in the Army back in the day, and so he was honored with a military honor guard and three-volley salute at the gravesite. The honor guard bugle player played taps, and the flag draped over Grandpa’s casket was ceremonially folded and presented to the family. This was a ‘first’ for me, I am glad we (the family) elected to request the honor guard (it’s a free service, but it was our choice whether to have them or not).

Before closing, I need to publicly thank Kathryn, Marissa, Kate, and Amy for taking time to call me on the day Grandpa died, and also Kathryn and Ashley for calling me the day of the funeral, even though you weren’t able to be there in person. It meant the world to me.

But I know that you’re okay

And somehow we will find our way through the darkness through the rain
Cause you’re never really far away, you’re still watching over me

And that’s why I know we’ll be okay
Posted by Jeremy Gustafson at 8:30 PM 1 comment: