When and where are you going on your honeymoon?

Our plan had been to travel to several European countries (Scotland, Netherlands, France, Spain, and Greece among them) in June 2017. However, for a variety of reasons (including focusing on strengthening our relationship), we ended up waiting too long to begin planning in earnest, and there simply isn't time enough remaining before what would have been our planned departure date in order to pull together a trip for summer 2017. Therefore, we've made the difficult decision to post-pone our honeymoon until summer 2018, which we hope will give us enough space to deep-dive into the planning and feel confident about our travel agenda.

Why aren't you writing on your blog anymore?

I should think that answer is self-evident :) Turns out being in a relationship consumes a LOT of time. When I look at my time budget, the sad reality is that I've needed to cut much of the "good" in deference of what I believe is the "great". This has included my weekly writing night. So, expect blog posts to be infrequent and sporadic.

We started remodeling our downstairs bathroom back in December, with the hope of being done in a couple months. Well, it's almost May now, and we've yet to even finish the demolition phase. We were delayed in part by tile-backing glue, which turns out to be incredibly difficult to remove. We've been delayed in larger part, though, simply by having too many active Life projects at once (and a social life, to boot!), the end result of which is not being able to focus as much time on the bathroom remodel as we'd hoped.

I heard a rumor you might be getting a bunny?

It's true! Alissa has wanted a puppy for years, and I've always been very direct that I hate dogs (well, in fairness, it's more that I get mad at dog owners who don't train their dogs). I grew up with rodents (rats and hamsters) as pets, and said I'd be okay getting one of those, but Alissa wanted a more substantive animal with which to cuddle, so we compromised on getting one bunny (because of course if you get two bunnies, then all of a sudden you've got twenty bunnies).

After some searching on Bunn-e-Harmony (not the website's real name, but I think it should be), we found a pair of bunnies at the Eau Claire, WI humane society that were litter trained, already spayed/neutered, cute, and not too shy. Apparently bunnies are social creatures, and so if you get just one, it might get lonely during the day when you're not around to play. But also, apparently, you can't just get two random bunnies and stick 'em together, because they might get territorial and fight. In our case, the two we found are what's called a "bonded pair," which means they're BFFs and get along (and also must be adopted together).

After filling out an application with the human society, we were approved, and went to pick up Luke and Daisy this past Sunday to bring them to their forever-home. They're brother and sister, one year old, and we're told have a love for dried mangoes (as do Alissa and I - this could lead to some pretty serious mango competition when we run low). We were told to leave them in their cage for the first week so they could adjust (after that, we may be able to give them a larger patch of house to roam during the day), but we couldn't resist letting them run around the living room just a little bit in the evenings, with very close supervision (this also makes it easier to clean the cage, especially given their early propensity to overturn their litter box in apparent protest of being locked up). So far during these hop-abouts we've not had any bunny-poo-out-of-the-cage accidents, which gives us some confidence we may be able to keep the cage door open for longer periods of time. 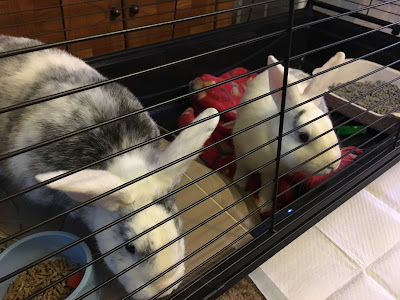 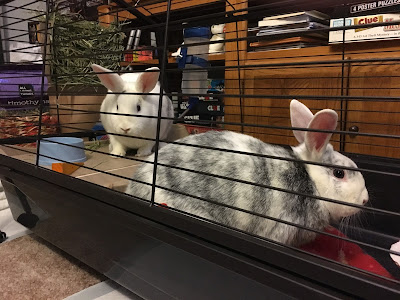 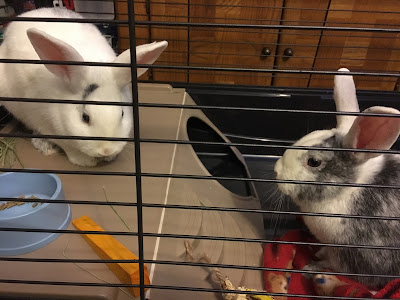 Posted by Jeremy Gustafson at 11:56 AM No comments: