Los Angeles brings me the weirdest adventures. Yesterday, Anne and I went to watch two of her friends in a softball game - apparently TV shows here have softball leagues, and they were both playing with the crew of The Middle. Afterward, Anne's friend Laura told me about a show she's assistant stage managing: a musical about Vietnamese vegans and vegetarians. No, seriously, those words were used to describe it.

Laura offered Anne and I comps for that evening to see the [one and only] performance. Anne likes musicals, I like musicals, so sure, why not?

Turns out this show was a freaking big deal. Red carpet, fancy dresses, tuxes (I felt soooo out of place in my business casual - blame it on being out of town, it's not like I packed a suit), and TONS of cameras. Picture the Oscars. Except Vietnamese. And vegan.

Will Call had trouble finding our tickets, so ended up giving us seats in the fourth row. Center. $75 seats. Free. Win. The acrobats in the first act were literally flying right over our heads.

The show took us on a whirlwind tour across the globe, featuring songs and dance numbers from more than a dozen countries, all based on the poetry of Ching Hai. Truly awe-some performances. The songs were interwoven by the story of strangers on a train, struggling to find their inner peace. That part of the show was predictable, but didn't detract from the amazing musical numbers.

And of course, also nerd-tastically fun to watch, were the cameras - a dolly right in front of us, a steadicam operator walking near us, a couple jibs/cranes. Quite. the. deal.

I'm still coming down from the high. What a night.
Posted by Jeremy Gustafson at 12:06 PM 2 comments:

PSA Against the Marriage Amendment

Minnesotans will vote in November 2012 on a constitutional amendment that would prevent marriage equality. On religious and personal moral grounds, I strongly oppose this anti-family, anti-marriage amendment, so when my friend Maggie approached me with a script for a "vote no" PSA, I immediately agreed to produce it. We shot for one day in May 2012, and this is what we made.
Posted by Jeremy Gustafson at 8:35 PM No comments:

One reason why I'm voting no

One of my best friends got married last weekend to the love of her life. Their ceremony was beautiful, a mixture of traditional liturgy with modern influences (one example coming to mind: communion open to all, and served by the couple).

What got me, though, was a sentence from their vows: "...Every day when you wake up, until the day you can't, I will be there...." I teared up. So. Beautiful.

I am a Christian, and that's one reason why I am voting "NO" in November. 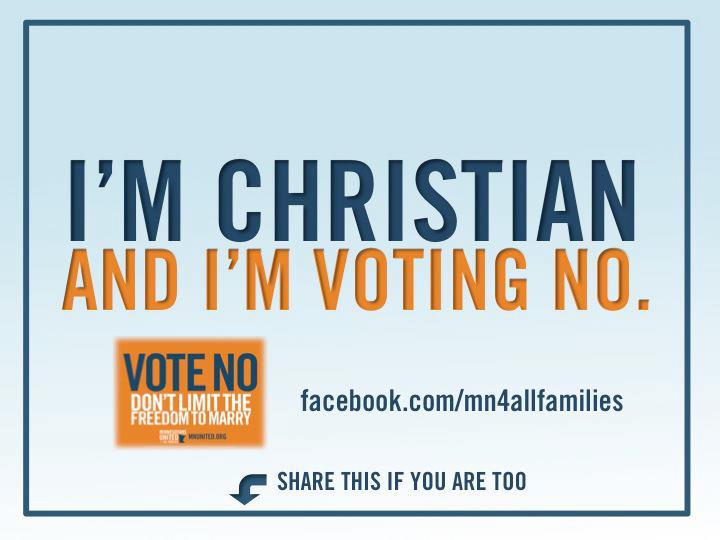 Posted by Jeremy Gustafson at 3:23 PM No comments:

My past month has been emotionally tumultuous. Yet flying through the turbulence I'm finding zen. The Spirit constantly is reminding me: "worship". Part of my worship experience has included learning ASL to sign along with the song lyrics. I don't know much. In fact every song I hear reminds me just how little I know. But I know enough to sign a few lines, and to make my own prayers. They're not anything complex, just the bare essentials. And I'm probably not signing all the signs perfectly. It's all right. God knows what I mean.

One sign I really love is "trust" - it's beautiful: two hands, grasping in the air, grasping at something I cannot see, but then grabbing on, clinging to what I know is there.

Help me to trust, Lord. Help me to hold on to You.

"I trust in you, Lord, because I know that you love me, and your love never fails"
Posted by Jeremy Gustafson at 9:04 PM 1 comment:

Last summer I set some lofty goals for myself. By New Year's I'd not made much progress. Let's see how I'm doing on that list:


Play guitar more often, even when I don't "feel" like doing it
Failed.


Learn basic chords on my banjo, even if I do not become an expert
Failed.


Finish post-production on The Vacationers, Paperclip, and start working again on Far Away
Failed. Vacationers has been in a constant state of "almost" for six months - soundtrack almost done, editing almost done, color almost done, etc. Paperclip still is in rough cut. Volunteers are wonderful human beings, but by the very nature of them being volunteers (meaning: I have no budget to pay them), I am on their schedule, not mine.

My life was too busy to work on Far Away.


Let God start leading and stop trying to force it
Minimal success, and still a constant battle. In my "old age" I'm working toward a more zen-like lifestyle. But I worry. A lot. Too much.


Prioritize friends over work
Success. Even better, I have found a good balance between spending time with others, and taking time for myself.


Explore the wonders of Netflix
Success.


Discern my calling to Los Angeles, and what I hope to accomplish
Decided "not yet." I am at peace with this.


Be honest with myself
Absolutely. (and even independently confirmed by a psychologist).


Eat healthier and exercise, even if it's "just" going on more walks
Marginal success.

Setting "reasonable, achievable goals" means being specific, and focusing only on outcomes that are actually under my control. For example, rather than goal-ing to "get hired at ___" (an outcome over which I have no ultimate control), instead I might say "apply for a job at ___", an action I can control.

Setting "reasonable, achievable goals" also means being realistic about what I can actually accomplish in my limited waking hours. I'm a list-maker. I even make lists of lists I need to make. And as a result I constantly disappoint myself by not finishing everything on my lists. I need to curb my todo list optimism in order to prevent feeling overwhelmed at the end of each day.

A sub-goal of setting "reasonable, achievable goals" is to change my habitual tardiness into punctuality (because saying I will be somewhere at a specific time is, in a sense, a "goal," and should therefore be something I create under the influence of being reasonable and achievable).


Avoid procrastination
I spend too much time making and re-ordering unrealistic lists of things to do, rather than actually doing things. Also, I put off difficult or time-consuming tasks, which inevitably stresses me out more later. This may be the second most difficult challenge I face on this list (the first most difficult being setting reasonable and achievable goals).


Focus on tasks that matter
I desire to prioritize todo items that actually matter, then forget about everything else on the list that is not important and does not matter (inspired by Randy Pausch's speech on time management).


Stop stressing about how much I can't accomplish
My coworker Keith was fond of the phrase "if it gets done, it gets done". Que sera, sera. This goes against my nature, but I feel is an important goal toward which to strive. Sort of. Being completely laissez-faire is not good, however neither is getting worked up from self-imposed expectations and deadlines. Yes, sometimes there are things that simply have to get done, but usually it's not as urgent as I think it is.


Take one thing at a time
Multi-tasking can be a great asset, but it can also cause thrashing. And so, while some tasks naturally lend themselves to running in parallel (for example, laundry and vacuuming), far more often I am most efficient tackling projects serially, focusing on only "one thing at a time."


Accept that I cannot solve every problem
An alternate way of saying that: not every problem is one I am required / expected to solve. This relates to the previously mentioned 'learning to say "no."'


Strive toward better anger management
Stupid people, and more specifically "stupid people emails", make me angry. I need to take this under control. My new process is as follows. Before responding to a stupid-person email, first:


Remember that eating some humble pie will win brownie points in the end; I don’t have to admit fault, but I can apologize that the situation has escalated, and suggest courses of action / resources.


Move on from Minnehaha
I am ready to be done. Yes I will still have friendships I want to maintain, but as for employment, it is finally time to move on. This has been a slow process since April; now that they've finally hired a replacement, I am/will be working to teach him all about all the custom code I wrote. This will likely last into the beginning of next school year, because there are some things that only need doing at the beginning of school. But aside from those tasks, I would like to get everything else transferred over to him as soon as possible, and have one less time commitment in my life.

You may note, this is the only concrete, action-item goal in my list here; that's part of setting "reasonable, achievable goals". However, moving on from Minnehaha also involves a considerable amount of emotional energy - the school was my home for 10 years, and leaving that behind is not easy.


Eat more healthfully
Subway counts. And I'll try to cut down on the sweets. Gotta watch my weight after all. No, that part is a joke. But I do really need to eat better.


Take responsibility for my own actions
When I make an important decision, I first logic it through on my own, then consult my parents and friends (depending on the weight of the decision, sometimes multiple conversations with each person are involved).

A life-altering lesson I learned in September, though, was that at the end of the day I don't need to justify myself to anyone other than myself, and God. I love and respect my friends and family, but I will never be able to make everyone happy, especially when their opinions/advices do not mesh cleanly. At the end of the day, I need live with myself without feeling I settled, and without feeling regret.

A sub-goal here is to stop worrying so much about what other people think; or, perhaps more accurately: "be discerning about whose opinions I let matter." Getting others' input is valuable; then the onus is mine alone, and I need to trust my instincts.

A second sub-goal is to find my value in the Lord; aka, be myself, and do so unashamedly.


Spend time with God
This includes time spent in worship, in prayer, or reading my Koran, Bible, or other theological books (Winnie the Pooh counts).

In addition, listen to the Spirit's leading.


Continue maintaining a healthful life/work balance
Step 1: phrasing it "life/work" rather than the other way around.
Step 2: take time for myself, don't overbook myself.
Step 3: continue to allow time in my schedule for the unexpected, for helping a friend, for something spontaneous, and, most importantly to me [right now], for developing a relationship when I enter into one again.


Don't ever settle
Don't settle for anything less than what it ought to be.

Posted by Jeremy Gustafson at 5:18 AM No comments: