Blast from the past: this post should have been published back in August 2010 Do you feel awkward when you drive by beggar with a cardboard sign? I do. In her sermon a couple weeks ago Dawn (one of my pastor's at Jacob's Well) played a video of a woman named Ladonna Witmer speaking years ago, and something she spoke struck me hard:


If you talk to my roommate, Colleen, and you tell her about God's unconditional love, she'll just look at you and say, "well what have you done for the homeless lately?" Because if you can't prove to her that you... can take what you believe about love and show it in your life, then she's not going to pay any attention to you.

In a non-trivial way that was a life-changing moment for me, because I felt, I knew, immediately, that I had to do something about that. And the reality is I can’t help everyone, but I can make a difference in a few people’s lives. Long ago I’d heard from my Mom this idea of making bags of food and stuff to hand out, and keeping them in the car. So I went home and assembled some: gallon zip-lock, a Gatorade, water, and cereal bars. Hardly costs me anything, I buy that all in bulk at Sam's Club. But it’s something. On day 1 I was running late to a car appointment and passed a guy on the corner. I didn't see him in time to slow down, but after driving past felt a niggling feeling, so I double-backed and gave him a bag. He said "thank you", we talked briefly, he seemed educated, coherent, and I felt good about myself. My prayer was, "Okay God, no more people today, I'll get the rest of the bags in my car for tomorrow, I promise". I was convicted that I needed to do more of this. That night I brought the rest of the bags out to my car so I'd be well-stocked and ready. On day 2 I saw another guy, he might have had some mental issues and didn't seem quite as alert as the guy from day 1; but he mumbled a thank you when gave him the bag. He then went back to his street corner, threw down his sign, plopped open the bag and downed half the water right then and there. I guess he must have been thirsty. I realized I would have to make more of these little bags. This is worthwhile. And I've been doing it since, in some form or another. I write this blog post as a journal for myself, not because I want to guilt anyone else into following my steps, nor for anyone to give me praise. I don't want it. If you happened to feel inspired to do something of your own, then that's great! But truly, this is just my own personal journal.
Posted by Jeremy Gustafson at 11:27 PM No comments:

Tuesday night AWAKEN performed last year's drama for a gathering of LCMC pastors and church leaders in Des Moines. Half our cast was different because not everyone from last year was able to make it back, so there were a lot of subs, and even those of us who'd been in it previously saw changes to our roles. Fortunately for me my changes were minor, but some people had completely different roles to learn!

It was hard walking in to the space during setup and seeing the LCMC logo, just because of my own personal beef with the LCMC. I had struggled with this decision months ago, whether I could in good conscience help out with this performance. In the end I figured I'd be quite the hypocrite if I didn't, passing judgement on those I judge for judging. We're all imperfect human beings, who am I to assume I'm any better? Still, it was unexpectedly difficult being in that space at first.

We set up most of our equipment Monday night. Easiest load-in ever: the convention center had a real loading dock, so Derek backed the truck right up to the building and we never needed to use the lift gate. And the main room was about 10 feet from the dock.

Adding to the "make my life easy", we tied our audio into the convention center's system that was already set up, so we didn't need to set up 4/5 of our audio gear (not entirely true: we set it up, then tore it down when we finally figured out we could use their speakers... don't get me started). For tear-down after the performance this was absolutely wonderful.

The convention center staff stayed extra late Monday night helping us finish rigging our truss and focus lights. Meaning no need for the truss stands. And we used their projector, so we didn't have to set that up, either.

I make it sound so easy. Setup still took 4+ hours Monday night, and then Tuesday we couldn't get into the room until 5:30, performance starts at 7. In that hour and a half we had to set up the entire stage, re-set the floor lighting, test everything and hope it all still works, have the cast run through a couple scenes and then set props and put on makeup. Stressful. We didn't end up starting on time :) 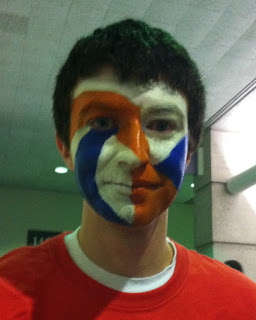 Special thanks to Beth for putting on my makeup!

My role was mostly the same as before, but still, it's been 5 months, so almost everyone was using a notecard. This got awkward because I was borrowing someone else's shorts, and to avoid logos they had to be inside out. So throughout the drama I'd be standing either backstage or in the back of the auditorium digging in my pants trying to find that pocket. Hopefully no one noticed.

The performance itself went splendidly. Not perfectly, but given so many new people, and the rest of us who haven't looked at the script since April, and no real rehearsal in the space, everything went really, super great. We exited before it happened, but I'm told we were given a standing ovation. As Jon mentioned to us, we did more promotion for AWAKEN in that one hour than in the entire 6 years of its history. Because every single person in that room is a church leader with the power to bring AWAKEN to their church. Apparently there were a number of folks wanting a west coast tour: Montana, Washington state, California, and a few others. Who knows if it'll happen, but how exciting that we just got national exposure.

Clean-up went well. Their worship team for the next morning rehearsed while we wrapped cables and tore down. I noticed many of us were singing along, and it was nice to have a little bit of our own worship time after the chaos of the previous hours.


The new season of AWAKEN starts this weekend. Heading to Des Moines tomorrow for our first Attack. There will be many familiar faces: my AWAKEN family, I call them - and many new faces: friendships waiting to be made. Welcome to the adventure. Again.
Posted by Jeremy Gustafson at 12:08 AM No comments: