Blast from the past: this post should have been written and published in February 2012

In late January I helped cast a short movie called The Invitation, a "romantic comedy about lutefisk", as I describe it. After auditions finished, I got talking with Brad, the director, and mentioned that if he needed more crew people I'd love to help out. Turns out he needed a line producer slash AD-type person, and when I elaborated on my skillset, he pretty much hired me on the spot. Merry gave me the time away from MA so I could take the job.

We shot the movie for six days in late February. What an amazing adventure. Exhausting also.

In that week, I learned so much. I'm used to working with an all-volunteer crew and cast; the difference between that, and working with a professional (paid) crew: night and day. The professionals were always on the ball. For example: day 1, the adage was true: "if you're 15 minutes early you're on time, if you're on time you're late." Everyone was there early, eating a walking breakfast, and setting up equipment 10-15 minutes before call. Second example: when we started shooting the first scene, the wardrobe and makeup people were on set outside in their parkas (it was cold that day), ready to swoop in on a moment's notice for last looks and touchups. Same with art department and the grips/gaffers. Third example: I never had to call "we're back" from lunch - everyone was already back to work. I've loved my indie crews, but now having seen 'the other side', if you will, I want to work with professionals more often.

I had a chance to minister to one of our crew members the first day. An interpersonal conflict had come up, and because I was in my position (line producer), it made sense for her to talk to me about it. I listened, gave her the best advice I could, and then asked if I could pray for her. I don't know if she's a believer or not, but she let me. Who knows if it meant anything to her. It meant something to me, though; not the prayer itself, let's face it, wasn't my best prayer ever; but the fact that I could listen, console, and help (aka minister to) someone on set: eye-opening for me. As relates to my journey toward seminary, another reminder that God can and will use me, whether or not I have a clerical collar.

On Thursday we shot all morning on an outdoor hockey rink, and had a genuine high school girls' hockey team on set with us! They even brought an extra uniform for our co-star to wear. For much of the morning, I helped direct the background action, and what made directing them so much fun was that any time I needed the entire team's attention, all I had to do was get one or two of them to listen, and then they took care of wrangling the rest. The first time this happened really caught me off guard, because all of a sudden I had the whole team circled up around me, padded up, with sticks, and they're all on skates so some of them were a full foot taller than me. If you've never been in the middle of a hockey team's circle-up, it's intimidating. Anyway, the team was wonderful, and the coach told me they really enjoyed being on set. But what made this even more heartening, the coach emailed me the next day and said that one of the team's friend's father had passed away just one or two days prior, a man who had coached many of them when they were younger, so being able to come to the movie shoot was a much-needed and uplifting distraction from that sadness.

That afternoon we shot our lutefisk dinner scene with 20 or 30 background actors. (some of them said they'd only come if we had real lutefisk for them to eat! We had it, and they ate it. Crazy) When it came time to shoot, instead of yelling for everyone to be quiet on set, I tried something new, an idea I'd heard from one of my LA friends: I calmly made a "shhh"ing noise. Within seconds, the room was silent! This took me aback, I hadn't really expected it to work. Made my day.

It also helped relieve my stress from running behind schedule on the hockey scenes. We'd been given a "hard out" from the location, which meant we had to be off the rink by a certain time. And we ran very behind schedule. Something similar happened on our final shooting day: the DP, his assistant, and their cameras had to get on a plane, so our time was very limited. What amazed me in both cases was that no one freaked out, even though the clock was looming. It's not that folks were unaware of the urgency; to the contrary, from what I observed they understood better than many crews I've worked with. It just didn't phase them, or keep them from getting the job done.

Everyone on set was gracious. Each department knew their stuff, and did it well, but also chipped in if they saw another department needed a hand. It's a sensitive line, I've learned, because one never wants to appear that you're stepping on another department's toes. At the same time, there is such a thing as simply helping your fellow human being. And that's what I witnessed.

As for me, I worked for pretty much every department at one point or another, filling in as needed. My primary jobs were: creating daily call sheets; making sure everyone on the crew and cast had signed their paperwork (and, at the end of the week, got paid); and booking the extras for our lutefisk dinner scene. I was also in charge of importing and backing up the footage and sound recordings throughout the day. But when I wasn't doing that, I was on set in the midst of the action, helping grab equipment from the grip truck, running slate, moving scenery, getting status updates on actors' makeup/costumes, and the crew's ETA to rehearsals and shooting, etc. I did a lot of running around. It was a stressful job, but I loved it so much. And I got paid. I got paid to do something I love. How awesome is that?

At the end of the shoot, Brad sent me this note:


Jeremy, thank you! You are incredible at this! I don't know how you did everything you did! Your work ethic and enthusiasm for film making is inspiring. And you handle everything with grace, humor, and humility. It's been such a pleasure to work with you. I can't thank you enough. I will let you know if there is more work on this or future projects.


Above all else, I met a lot of phenomenal people. I do hope sincerely to work with [almost] every single one of them again. Tom the sound guy was hilarious; Daron the DP never lost his cool, was always on top of things, always knew what was going on - I want to be like him when I grow up (and he wore an awesome scarf); Dave the gaffer / key grip not only let me help set up stands, but taught me along the way; really, all the grips were friendly and encouraging. And then there were Brad's parents. They were adorable. Completely clueless about how a movie is made, but hearts made of absolute gold. 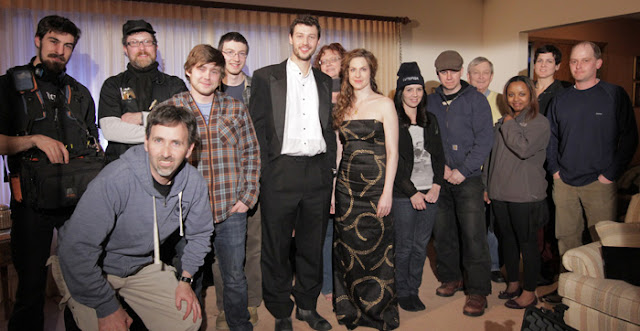 Posted by Jeremy Gustafson at 9:46 AM

It is both humbling and heartwarming to be validated - in writing - for one's work. It opens a peep-hole into what others really think of what you have done and, in turn, gives me yet another example that you have grown into the man I always hoped you would be.