Sandwiches, and conscripting friends to help make bags for beggars

I saw a link on Facebook recently, titled "3 Ways to Responsibly and Compassionately Respond to Panhandling". If you can spare 5 minutes, take a hop over to read it (especially her suggestion #1).

Yesterday my morning church (Jacob's Well) had a "service service" where, instead of listening to a sermon, we made one thousand sandwiches for The Sandwich Project MN to give to people experiencing homelessness. With 100+ volunteers, it took only 20 minutes, and it was fun. Post-sandwich-making, we also watched a 5-minute clip about Allan Law, aka "the sandwich man", and a new documentary called the Starfish Throwers.

As I've written before, Beggars in Spain is one of my favorite books ever. The title refers to the conflict between productive and non-productive members of society, and within the book that conflict is manifested between genetically modified humans and those who aren't. Nevertheless there are parallels to be drawn to our modern day treatment of panhandlers and people experiencing homelessness. Life-altering to me were these quotes:

What the strong owe beggars is to ask each one why he is a beggar and act accordingly. Because community is the assumption, not the result. And only by giving non-productiveness the same individuality as excellence, and acting accordingly, does one fulfill the obligation to the beggars in Spain.

There are no permanent beggars in Spain. Or anywhere else. The beggar you give a dollar to today, might change the world tomorrow. Or become father to the man who will. Or grandfather, or great-grandfather. There is no stable ecology of trade, as I thought once, when I was very young. There is no stable anything, much less stagnant anything given enough time. And no non-productive anything either. Beggars are only gene lines temporarily between communities.

If you've ever ridden in my car, you may have noticed my back seat is always well-stocked with what I call my "homeless bags" (another name I've heard others use is "manna bags") - gallon ziplock baggies containing a water bottle, and various cereal bars and canned fruit. Near as I can tell, I started doing this around August of 2010, owing primarily to my discomfort of driving by a beggar on the side of the road and not being willing to give them money.

After leaving church yesterday, I planned to stop by Sam's Club and buy ingredients for another batch of 3 or 6 dozen bags. But my friend Matt had also texted asking if we could hang out. Since he's been gone the last several months I did want to spend time with him, so I was torn. Inspired by the service event at JW (and maybe a little inner-Tom Sawyer?), though, I told him what my plans had been, and suggested he could come over to help me put the bags together. To my surprise both he, and also our friend Joe, were happy to help! What would have taken me hours to do on my own, we accomplished in ... actually I didn't time it, but, way less time. For about $150, we made 70 bags. 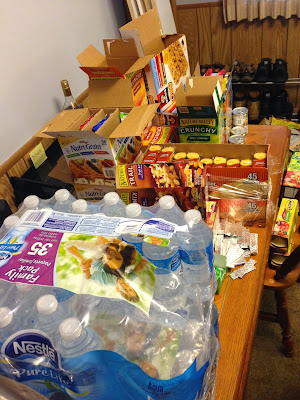 Why do I write this? I hesitated because of Matthew 6:1-2, but on the other hand, service to others is integrally part of our Christian walk, and I think I've found one neat way of being those "hands and feet" we're always talking about (in our Christian-ese language). Because of that, I wanted to share it, and in turn, invite you, Reader, to contemplate where your own Calling is for service. It may or may not look anything like mine, and that's okay.

What I've found with the bag idea, is that very rarely have I handed one out and the person didn't appreciate it. A far more typical response is a deep and sincere "thank you". And oftentimes, I have a feeling they're thanking me for much more than the physical bag - they're saying "thank you for acknowledging I'm human," just like that article I linked to at the beginning of this post was talking about.

Posted by Jeremy Gustafson at 9:46 PM

Email ThisBlogThis!Share to TwitterShare to FacebookShare to Pinterest
Labels: Beggars In Spain, Homelessness