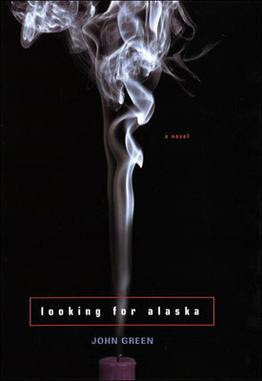 At the end of November I finished another John Green novel called Looking for Alaska (John Green also being the author of The Fault In Our Stars [which I read in 2014 but didn't blog about] and co-author of Will Grayson, Will Grayson, which I read not long ago). The story follows teenager Miles (nicknamed "Pudge," because he's actually very skinny) during his junior year at a boarding school away from home. He befriends prank-loving fellow students Chip ("The Colonel") and Alaska, and they have many adventures... I make it sound like an after-school special, but it's not, I just can't say much more than that without giving away half the story.

This author has an hilarious and often hyperbolic writing style that frequently cracked me up, even though I was listening by myself. For example, this quote:

He told me this while ripping through his duffle bag, throwing clothes into drawers with reckless abandon. Chip did not believe in having a sock drawer or a t-shirt drawer; he believed that all drawers were created equal, and filled each with whatever fit.

When I heard that, I thought to myself, "this reminds me a lot of how the author in Will Grayson, Will Grayon described his characters." Then I remembered, oh, right, same author! Not that I'm the pickiest critic ever, but seeing as this is book #3 of his that I've read in 6 months, I think that says something.

Much of the book's conversations and inner-voice monologues revolve around these two central quotes: Simón Bolívar, "How will I ever get out of this labyrinth?" and François Rabelais, "I go to seek a Great Perhaps." In a rather flippant way, I think those quotes aptly express the human experience: how do I deal with life, what is my Calling, what is my potential, where does it all lead?

While L4A can be vulgar, I agree with the author's comments that I found quoted on the Wikipedia article:

"Some people say, 'You wrote a dirty, dirty book.' But there are very old-fashioned values and even a lot of religion in it.... There are some adults who think that the only kind of ethics that matter are sexual ethics. So they miss everything else that is going on in the book."

The characters behave realistically, and more importantly, the story addresses some heavy hitting issues, like (spoiler alert) death. The book is divided roughly in half, with each chapter heading reading either, for example, "51 days before," or, "3 days after," with the central unifying event between those two halves being the death of one of the main characters' friends. Journeying with them on their paths toward healing is a powerful experience as a reader. I think this quote in particular captures something of what it's like to lose someone you care about:

I have lost something important, and I cannot find it and I need it. It is fear like if someone lost his glasses, and went to the glasses store, and they told him that the world had run out of glasses, and he would just have to do without.

What I really like, though, is that the author doesn't rush the characters through mourning. They get half the book to work through their five grief stages. I don't think enough stories give that necessary space.

On a last, happier note: I loved the religion teacher, Dr Hyde, who garnered a number of my favorite quotes (below). Also the narrator's choice of old-man voice for Dr Hyde was quite amusing, really helped sell his "get off my lawn" attitude.

"So this guy... François Rabelais. He was this poet, and his last words were, 'I go to seek a Great Perhaps'" That's why I'm going. So I don't have to wait until I die to start seeking a Great Perhaps." - 5:05

He told me this while ripping through his duffle bag, throwing clothes into drawers with reckless abandon. Chip did not believe in having a sock drawer or a t-shirt drawer; he believed that all drawers were created equal, and filled each with whatever fit. - 17:08

Her library filled her bookshelves, and then overflowed into waist-high stacks of books everywhere, piled haphazardly against the walls. If just one of them moved, I thought, the domino effect could engulf the three of us in an asphyxiating mass of literature. - 23:36

"Have you really read all those books in your room?"
She laughed.
"Oh, God no. I've maybe read a third of 'em. But, I'm going to read them all. I call it my life's library. Every summer since I was little, I've gone to garage sales and bought all the books that looked interesting, so I always have something to read. But there's so much to do! Cigarettes to smoke, sex to have, swings to swing on. I'll have more time for reading when I'm old and boring." She told me that I reminded her of the Colonel when he came to Culver Creek. They were freshmen together, she said, both scholarship kids with, as she put it, "a shared interest in booze and mischief."
The phrase "booze and mischief" left me worrying I'd stumbled into what my mother referred to as "the wrong crowd." But, for the wrong crowd, they both seemed awfully smart. - 33:03

You can say a lot of bad things about Alabama, but you can't say that Alabamans as a people are unduly afraid of deep-friers. In that first week at the Creek, the cafeteria served fried chicken, chicken-fried steak, and fried okra, which marked my first foray into the delicacy that is the fried vegetable. I half expected them to fry the iceberg lettuce. But nothing matched the Buffrito.... A deep-fried bean burrito, the Buffrito proved beyond the shadow of a doubt that frying always improves a food. - 37:55

This teacher rocked. I hated discussion classes. I hated talking and I hated listening to everyone else stumble on their words and try to phrase things in the vaguest possible way so they wouldn't sound dumb. And I hated how it was all just a game of trying to figure out what the teacher wanted to hear and then saying it. I'm in class, so teach me! And teach me he did. In those 50 minutes, the old man made me take religion seriously. I'd never been religious, but he told us that religion is important whether or not we believed in one, in the same way that historical events are important whether or not you personally lived through them. - 1:00:14

I learned that "myth" doesn't mean a lie. It means a traditional story that tells you something about people and their worldview, and what they hold sacred. - 1:01:41

"Jesus, I'm not gonna be one of those people who sits around talking about what they're gonna do. I'm just gonna do it! Imagining the future is a kind of nostalgia.... You spend your whole life stuck in the labyrinth, thinking about how you'll escape it one day, and how awesome it'll be, and imagining that future keeps you going but you never do it. You just use the future to escape the present." - Alaska, 1:42:25

[Alaska] said that it was sexist to leave the cooking to the women, but better to have good sexist food than crappy boy-prepared food. - 2:54:58

There comes a time when we realize that our parents cannot save themselves or save us. That everyone who wades through time eventually gets dragged out to sea by the undertow. That, in short, we are all going. So she became impulsive, scared by her inaction into perpetual action. - 3:50:40

I thought, that is the fear. I have lost something important, and I cannot find it and I need it. It is fear like if someone lost his glasses, and went to the glasses store, and they told him that the world had run out of glasses, and he would just have to do without. - 4:29:38

She had proved to me that it was worth it to leave behind my minor life for grander maybes. And now she was gone, and with her, my faith in perhaps. - 5:25:02

"Karl Marx famously called religion 'the opiate of the masses.' Buddhism, particularly as it is popularly practiced, promises improvement through Karma. Islam and Christianity promise eternal paradise to the faithful, and that is a powerful opiate, certainly, the hope of a better life to come. But there's a Sufi story that challenges the notion that people believe only because they need an opiate. Rabi`a al `Adawiyya, a great woman saint of Sufiism, was seen running through the streets of her home town, Basra, carrying a torch in one hand, and a bucket of water in the other. When someone asked her what she was doing, she answered, 'I am going to take this bucket of water and pour it on the flames of hell. And then, I am going to use this torch to burn down the gates of paradise, so that people will not love God for want of heaven or fear of hell, but because He is God.'" - Dr Hyde, 5:27:48

"You need not specifically discuss the perspectives of different religions in your essay, so no research is necessary. Your knowledge, or lack thereof, has been established in the quizzes you've taken this semester. I am interested in how you are able to fit the incontestable fact of suffering into your understanding of the world, and how you hope to navigate through life in spite of it.

Next year, assuming my lungs hold out, we'll study Taoism, Hinduism, and Judaism together."

The old man coughed, and then started to laugh which caused him to cough again.

"Lord, maybe I won't last! But, about the three traditions we've studied this year, I'd like to say one thing: Islam, Christianity, and Buddhism each have founder figures, Mohammed, Jesus, and the Buddha respectively. And in thinking about these founder figures, I believe we must finally conclude that each brought a message of radical hope.

To seventh century Arabia, Mohammed brought the promise that anyone could find fulfillment and everlasting life through allegiance to the one true God. The Buddha held out hope that suffering could be transcended. Jesus brought the message that the last shall be first, that even the tax collectors and lepers, the outcasts, had cause for hope. And so that is the question I leave you with in this final: what is your cause for hope?" - Dr Hyde, 6:48:32

"After all this time, it still seems to me like 'straight and fast' is the only way out. But I choose the labyrinth. The labyrinth blows, but, I choose it." - The Colonel, 6:51:08

He was gone, and I did not have time to tell him what I had just now realized: that I forgave him, and that she forgave us. And that we had to forgive to survive in the labyrinth. There were so many of us who would have to live with things done and things left undone that day, things that did not go right, things that seemed okay at the time because we could not see the future. If only we could see the endless string of consequences that result from our smallest actions. But we can't know better, until knowing better is useless. - 6:54:46

Thomas Edison's last words were, "It's very beautiful over there." I don't know where "there" is, but I believe it's somewhere, and I hope it's beautiful. - 6:59:57

"I was born into Bolívar's labyrinth, and so I must believe in hope of Rabelais's Great Perhaps." - The Author, 7:03:03

Posted by Jeremy Gustafson at 10:09 PM