Three years ago today, Minneapolis police murdered Jamar Clark, an unarmed black man, younger than I. As has become typical in such cases in present-day America, no charges were filed against the white officers. Let me say that again so it sinks in: Jamar's murderers are known, but never faced charges or a trial.

One year ago this evening, having recently found myself connected in a Kevin Bacon way to Jamar's life, I felt drawn to attend a two-year memorial/remembrance gathering. Unbeknownst to me until parking my car, Jamar was shot just blocks away from North high school, where I attended in 9th grade (my somewhat traumatic experience that was North High is a topic better discussed in-person, rather than online). 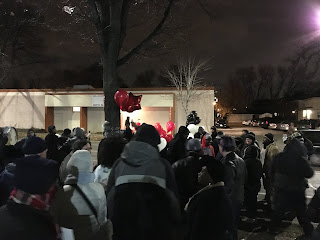 I admit some trepidation as I walked to where Jamar was killed; there were perhaps 75-100 or more people gathered, most with different skin complexions than mine, gifting me another rare moment in my life in which I found myself the minority. Someone was handing out candles; I took one gratefully, as the temperature was cold and the candle helped [slightly] to warm my hands. Unfortunately it was also windy, so despite my efforts, my candle did not last long. (I noticed I was not alone in my candle struggles)

On the boulevard stood a cardboard sign with Jamar's name, accompanied by candles and a few teddy bears. People held signs. Someone wore a hoodie with names written on it; as I read I realized it was a list of other police murder victims from the past several years, including local victims Philando Castile and Justine Damond.

Standing alone, I waited, and pondered my place in this; "this" being, among other things and in no particular order: white privilege, living with a local government that allows its employed protectors to kill without serious repercussion, my own confused emotions from attending North High, my feeling of "should I even be here?", and just trying to take in the experiences of the moment. And I was also focused just on trying to stay warm - it was very cold outside. I struggled to imagine the dedication of those who camped in front of the police precinct for 18 days after Jamar's murder.

My notes from a year ago tell me the event started with someone singing, though I no longer remember the song. This was followed by a short and emotionally powerful speech by a white woman, challenging the white people in the crowd that "we have to do better."

Jamar's parents, both biological and adopted, gave speeches, vastly different in tone from one another. I scribbled two phrases that caught my emotions. From the former, as best I can recount it: "Jamar is still here and alive in each of you. We don't mourn the dead; we celebrate his life in each of you who showed up." And from the latter, Jamar's adopted father described how Jamar was killed: shot through the eye at point blank range, leaving black gun powder residue around his face. Understandably, Jamar's father was - to put it mildly - angry. Hearing his not-so-subtle disparaging remarks toward the police was eye-opening to me.

Throughout the speeches, any pauses were filled by a man in the crowd yelling "Listen!" It struck me as odd the first time, then as it became a refrain, I realized in an abstract sense, he might be speaking to me (as a white person who's never given much thought to my own role in "this"), though I think it was an even more generic plea simply for these stories to be heard. 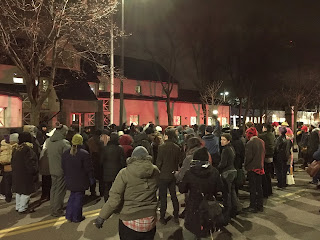 When the speeches finished, the North High marching band began to play, and our vigil took over the street, marching two blocks to stop in front of the fourth precinct. What struck me most powerfully was that we had police cruiser escorts during this march, blocking the street so we could walk safely. With conflicting emotions difficult to convey in words, I was awe-inspired to live in a society in which the very organization against which we were peacefully protesting, was at the same time protecting our right to assemble / protest. The SUVs both in front and in back of the march maintained a respectful distance as we walked, and again I found myself simply trying to process the experience. 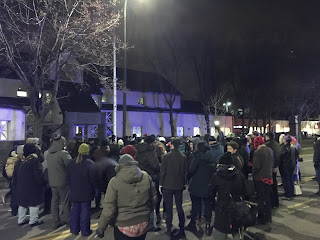 Reaching the fourth precinct, there were chants, I think along the lines of "what do we want?" Justice. "When do we want it?" Now. A young black man initiated his own rallying cry: "I say Jamar, you say Clark! Jamar!"
"Clark!"
"Jamar!"
"Clark!"
And so on.

A small group assembled with a portable PA to 'sing' a rap song (I suppose if one knew the song, the lyrics might have been understandable; I found it unintelligible due to the poor microphone + speaker, and lack of volume from the singers).

Finally, we returned, again with police escort, to the spot of the shooting. Emotionally full, I took the opportunity to head home.

A year later, I still reflect on this experience with uncertainty, specifically of what my social responsibility is. Meager awareness is perhaps a starting point but I doubt that can also be my ending point. Yet, I struggle to know what else, besides awareness, I can actually do. In the meantime, another year has gone by, Jamar's murderers continued to walk free, and in our country over another dozen unarmed black men have been killed by police. (Source)

It's time for all of us to listen.

P.S. Since drafting this blog post a week or two ago, I listened to the book The Hate U Give by Angie Thomas, which follows the story of a black teen who witnesses police shoot and kill her childhood friend at a traffic stop. Alissa had recommended the book to me some time ago, though I hadn't known the subject matter until I started reading, nor of course how incredibly timely it would be on this particular week. Though a work of fiction, the story tells truth in a way I think more white people need to be willing to hear. If you have an opportunity to check out the book, or the movie that just came out a month ago (on my todo list), I can't encourage you enough to do so.

Posted by Jeremy Gustafson at 7:54 AM