Awaken - My first experience as a mime! 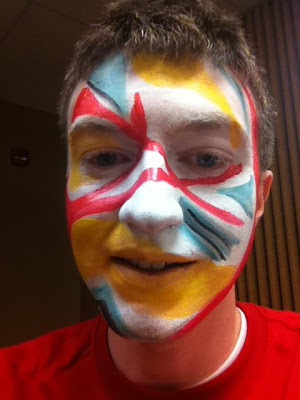 I was a mime this weekend!

You may recall I bought contacts two months ago specifically so I could be a mime in AWAKEN, but then that particular performance was cancelled because of weather.

Last week one cast member had to withdraw himself from the drama, and another one fell ill. When I read that email, I admit my hopes soared that I'd be getting a phone call later that day, since the leadership team all knew how excited I'd been to be in the drama last month. Sure enough, a text message came that evening: "Hey Jeremy. I have a question for you, would you call when you have a sec. Thanks!" The phone conversation started with me saying "If your question is what I think it is, then the answer is 'yes, I'd love to'". She laughed, and asked if I'd like to be in the Awaken cast. I affirmed, yes, I'd love to. At that point they didn't know exactly which role I'd play, just that I'd have a role.

On Friday I found out I'd play Peter. Tiffany graciously typed up notes for me about each important scene, and I was able to read through those before leaving home.

The Minneapolis crew met at my house at 7:30 Saturday morning, and we arrived in Waukee, IA at 11:40. Lunch. Then unloaded the truck and began setup. Once I had audio up and running, I excused myself and started writing my cheat sheet note card to keep in my pocket during the drama, combining my notes from Tiffany, the script, and the other cast members I was sitting with.

Once all the equipment was running and the entire cast had arrived, we ran several scenes as a rehearsal. Didn't have time to run the whole show, though.

Before each performance, the cast gathers and we pray out our voices - during the drama there is no talking, even back stage. The first time I heard about this (two years ago) I didn't really get it. This year, I've come to appreciate the spiritual discipline of surrendering one's voice.

As best I could, I tried to honor that. However, because I was new this week, Tiffany explicitly told the cast before rehearsal, "If Jeremy talks to you during the performance please talk back to him, don't try to mime it, it's okay". I appreciated that. Fortunately, for most of the drama, I just needed to follow the "J-Train" (Jesus and the disciples) and "react" - this mostly consists of looking astonished every time Jesus did a miracle. But there were a couple times when I got backstage and had no idea where I was supposed to go next - at those moments the cast was incredibly gracious. Courtney and Jacob both went above and beyond to look out for me (both before and during the drama), and every single cast member lifted me up with encouragement, I can't even name specific names because I'd have to name the entire team. I know people always say that, it's cliché. I actually mean it. I literally cannot think of a single person who did not go out of their way to encourage me.

That's what makes AWAKEN different from theatre. It's a ministry, not only to the audience, but to our team, as well.


A few lessons I learned: I have a new appreciation for glow tape. I never knew how hard it is when you're in full light and then all of a sudden, complete blackout and you can see nothing. There is one moment in particular when I run full-steam from stage to the back of the venue, and there's a point 2/3 down the aisle when the light stops and I can't see anything (even with contacts :), just keep running and hope you don't hit anything.

I learned what it means to be a servant. Sort of. I mean, I really wanted to be in the cast, I was really excited, but at the same time I don't have control over what role I'll play, I needed to surrender myself to what the leadership determined was best for the ministry, not for Jeremy. (I don't believe those are mutually exclusive) Doing both crew and cast meant I never got much of a break. And I was a driver. So here was my day: drive 4 hours Saturday morning, help unload the truck, set up audio, learn my role, run through rehearsal, set props, change clothes to cast, eat dinner, get face painted, do the drama! change clothes back to techie, strike, load truck, drive to host home (1.5 hours). Sunday, breakfast, church, unload truck, help with set up, switch to "cast mode", rehearsal, dinner, face paint, drama, strike, load truck, drive 3 hours home (arrive home about 1:15 am).

I loved every single minute of it. Except the driving, I could have done with a few less hours of that. Otherwise, loved every. single. minute.

Also, I learned face paint is really hard to take off. Unless you're not trying. You never know how much you rely on being able to itch your face, blow your nose, take a sip of water... until you can't :) Huge thanks to Lynnea for her amazing face-painting talents. I was very sad when it did come time to wipe away her artwork.

And this story is perhaps the epitome of AWAKEN: things won't go as planned. Saturday I nearly fell off a ladder when I was an angel (apparently it was only noticeable if you knew what that scene was supposed to look like), and then Sunday we had to carry Jesus by hand because the stretcher prop was missing. Improvisation. Oh, and Sunday's venue had an elevated stage, so we had to contend with steps and slightly different staging for the fight scenes. It all worked out well, just more lessons learned that I wouldn't have really paid attention to as crew.

After each drama, the cast gathers again, and we pray our voices in. I can't describe in words, it's a humbling experience. God, thank you for my voice. May it be an instrument of healing, reconciliation, and outreach, not just to Your Church, but to those who've been rejected, who've not experienced Your Love.


My heart is once again torn. I'm moving to LA soon, but before I made that decision, I pondered delaying my move until June 2012 for the sole purpose of joining AWAKEN next year as cast, not crew. That's why the opportunity to join cast mid-season this year is so perfect - I get to fulfill all my dreams. This ministry means so much to me, and it will forever continue as part of my heart and soul. I do not feel I can delay my move another year, but the thought is very tempting. I'm asking God for discernment now on how I might bring His ministry to California. Am I Called to start a "new" AWAKEN on the west coast? Is there already a drama group out there that I can join? Is there a way of bringing AWAKEN out there all the way from Iowa? These questions are so much bigger than I am. Good thing they're not bigger than God.
Posted by Jeremy Gustafson at 3:32 PM

Email ThisBlogThis!Share to TwitterShare to FacebookShare to Pinterest
Labels: AWAKEN