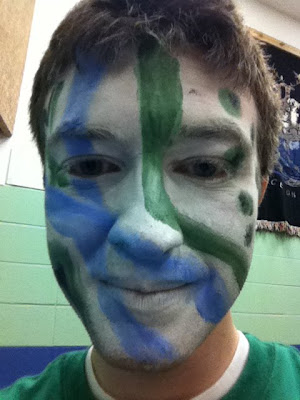 I miss it so much. I’m not ready to leave this chapter in my life. At the same time, I’m looking with great anticipation to discover what’s next. Where am I Called now?

I learned lessons of servant-hood. I learned to be flexible. I learned that what’s best for the ministry, what’s best for Jeremy, and what Jeremy wants, are not all mutually exclusive. I learned how to mime, how to channel emotion into my role when I cannot use words, how to take criticism knowing the love with which it’s given. I learned how to sit still and let Lynnea paint my face :) I learned to be less inhibited and just be me - if I feel like jumping as part of my worship, then I’m going to jump. I learned that I need a ministry like this in my life, something that makes me come alive, something I spend my entire week longing for, checking each day, “is it Friday yet? Do I get to go to AWAKEN yet? Do I get to see my family yet?”, and something after which I'm exhausted, but I feel good about having given my all.

Certain friendships were deepened that frankly I had never suspected would. Acquaintances became real friends, people with whom I will now choose to hang out and keep in touch.

Some of the Gospel characters came alive for me. I played Peter 4 times, and each performance I learned something new about him, putting myself in his spot, trying to feel what he would have felt. Maybe he’s my favorite apostle now :)

I also played an angel in those 4 performances, plus this past weekend. I got to participate in Creation, announce the birth of Jesus, and at the end, help welcome our humanity character into Heaven. The physicality, running around, adds to the excitement, gives me a small glimpse to how the angels might feel.

In the final two performances, I played a pharisee, standing on the opposite side of the stage from Peter. It felt out-of-body. I got to see the aftermath of what I [as Peter] had run from.

Of course my parents and friends from home thought I did a good job. What else would they say? Yet I’m convinced I did, because there are friends in AWAKEN who do tell me the honest truth, and would have told me if I screwed up. The director being one of them. For those people in particular to tell me I did well - that meant a lot.

Switching roles between weekends was a combination of mildly amusing and mildly confusing: as an angel, one week I was 3rd in line, the next I was 4th; very similar role even though I was subbing for a completely different person. Then I’d have to remember, “no, I’m not getting the whip, I fly over to the side and get the hammer and nails instead.”

Logistics of last weekend: Friday night five of the Ames crew drove up and stayed at my house. I felt so domestic hosting them: I had brownies fresh out of the oven when they arrived, plenty of snacks and drinks, sheets and blankets and pillows, I’d vacuumed (for the first time in longer than I’d care to admit), I’d cleaned, and most importantly, I loved being able to open my home to my friends.

Saturday we started setting up at the church at 9 - we had to be done working by 4 so the church’s band could prep for their 5:17 evening service. Some of the team (myself included) attended the 5:17 service, which was a Palm Sunday celebration. And their band played Hosanna (Praise is rising), which just happens to be our Palm Sunday song in the mime!

Several of my friends from church, and several friends from movie-making, came to see the drama that night. I was so happy to see them. There were others I really wish could have come, I longed for them to experience this Story. I can only do so much, I can’t force anyone to come.

Saturday night I hosted Jesus (Matt) and his wife at my house. Sitraka (our tech director) locked his keys in his car that morning when we left my house, so he had to break in through his window that night. Jesus stood in the street with a flashlight to help him. That's just fun to say :) I came out and ate a brownie while I watched, hoping to mollify any neighbors' suspicions about the apparent car-jacking.

Sunday morning we drove to Story City. The cast traveling in the 15-passenger van met at the church at 7:30. The four of us leaving from my house didn’t have to leave until 8:30. Beautiful :)

I did something really stupid on the way down: stubborn me kept saying I’ll have enough gas to make it to Albert Lea and fill up at my favorite gas station/plaza there. Well, we did have enough gas, but I think I was literally down to fumes - I pumped more gas into my car than I knew the tank actually held. Oops.

Our timing arriving in Story City was perfect: everyone had just finished unloading the truck when we walked in the building. Lunch. Then set up.

The school where we performed, two years ago we performed there, as well. And two years ago, on that very weekend, that was when my Crohn’s symptoms returned after 43 weeks off Remicade treatment. I was spiritually broken that weekend, my miracle had ended. Despair. And yet I knew God was somehow still there: of all the random fundraisers, this school was fundraising “coins for Crohn’s”. What on earth. Signs all over the hallways. That’s not your typical fundraiser. Not in a high school. God was present.

Two years later I’m back again, and I reflected on my faith journey over that time.

When I played Peter in the mime, I keep my eyes closed during the resurrection, Jesus comes to find us a few moments later. This night, this final performance night, I was not Peter, I was in the back ready to fly out as an angel in the next scene, and so I resolved: I’m sneaking into the doorway and watching the resurrection tonight!

Tear-down was hard. Emotionally. Last time. Last time to wrap cables, lift down the speakers, disconnect the audio board from Houston (our control center), wrap the audio snake, load the truck. And as that happened, people were leaving. I said goodbye to friends, and I won’t see them next weekend, I won’t see them for at least a month (post-season party), but some of them not even then. I don’t know when I’ll see them again. That’s sad.

In Gierke family tradition (my Mom’s side of the family), I was one of the last to leave. Sitraka agreed that he wouldn’t mind staying to help unload the truck into the storage locker, then we stayed with Blair and Tyler and Tanner, prolonging the weekend into Monday morning. (I took Monday off work, and didn’t read a single work-related email until Tuesday morning).

It rained when we unloaded the truck. Fitting. I didn’t cry, not at that particular moment. I didn’t need to. Monday afternoon, though, I had my sob-fest. Alone. Just me and God. I felt better afterward.

I’m not ready to be done. I keep listening to the AWAKEN soundtrack over and over. These songs will forever have meanings attached: creation of humanity; setting the stage for Jesus’ birth and lift; the Call of the disciples; walking on water; Palm Sunday; the Last Supper; prayer in the Garden; the Crucifixion and burial; the RESURRECTION! And HEAVEN! Once an AWAKEN song, always an AWAKEN song.

God, your servant is ready. I'm ready for the next adventure. Please don't make me wait too long :)
Posted by Jeremy Gustafson at 6:34 PM

Email ThisBlogThis!Share to TwitterShare to FacebookShare to Pinterest
Labels: AWAKEN