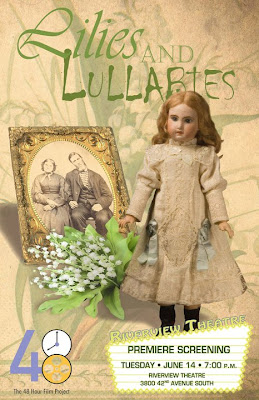 I flew back from San Francisco Friday night, landed at 8:30, my parents dropped me off at home, and I called in to Erin, my co-1AD on our 48 team. We had our genre: horror. Draft 1 was written, she ran me through the story, and confirmed call time for the next morning: 4 a.m. Ugh! I unpacked, went to bed, took a couple hours to finally fall asleep, and then nabbed a 3 hour nap before waking up to meet the day.

For anyone unfamiliar with the 48, brief synopsis: 7 p.m. Friday night is the kickoff - team leaders draw a genre, and are given a character name/occupation, a line of dialogue, and a prop. Teams then have 48 hours to write, shoot, edit, and turn in a 4-7 minute movie.

Saturday morning, woke up at 3, packed the car and got to the producer's house around 4:30/5:00 (I had permission to show up a little late :) Cast was already in costume - victorian dresses and corsets. Poor girls. Crew loaded up equipment into our cars and took off for the location: a beautiful house absolutely full to the brim of antiques, it's as if the entire house came straight from the year 1900. The owners are good friends of Erin, so we were able to tour the house two weeks ago and just fell in love with it.

Around noon we did our first dump of footage from the camera so the editors could start editing. That's right, we had a team of editors trading off throughout the weekend. Well played on our part.

Our crew was phenomenal. Very few interpersonal issues. And a couple people that I for sure want on every single movie shoot I ever do from now on, because they were that awesome. Really, overall, everything in the entire production went very smoothly. It probably helped that our core crew had just shot The Vacationers movie not too long ago, and for sure all our pre-production planning meetings helped us hit the ground running.

Our cast was also phenomenal. Scott, the house owner, stepped into acting at the last minute when another actor bailed. And he blew us away with his performance - he's completely a natural. Best part: we didn't even have to costume him, he just pulled something out of his closet, spats and all. And he whipped up a magic trick that we needed in the script. Our other actors were also exceptional. Considering how uncomfortable those dresses must be for long periods of time, no one complained at all.

We shot all day, wrapped at about 9 p.m. that night. We were all very tired. I went home, slept, and came back early Sunday morning after getting the wake-up call saying we had picture-lock. I brought my computer and did sound balancing, someone else did color, the composer worked on music, and another guy worked on foley. Then we brought it all together late afternoon and burned DVDs to turn in. The non-color-corrected DVD finished burning about 6 p.m., so John and Erin took that and went to the turn-in spot while Andrew and I waited for the color-corrected version to finish burning. It finished at 6:48, I literally ran out the door, Andrew started driving before I was even in the car, then we made it a block away from the turn-in and it was 6:59 - I got out of the car and RAN. I made it. Then we found out the deadline wasn't until 7:30. Which was great, except that my phone jumped out of its holster while I was running, and shattered on impact. Had we known the deadline was later, I wouldn't have been running. Lame.

I'm proud of our movie this year. Even the non-color-corrected version was good, so the fact that we had a good movie ready to hand in even if Andrew and I hadn't made it in time, that was a great feeling. I don't think it'll win the audience award - that almost always goes to a comedy, but our little Victorian ghost/horror story is not too shabby. And I'm usually a hard one to impress.

Sunday night after turning in the movie, our executive team went back to Andrew's house (base camp) and debriefed: a post-mortem analysis of what went well, and what didn't, and what can we do better next time. We did a lot of things well, and learned plenty to work on. I can't wait to shoot the next movie.
Posted by Jeremy Gustafson at 9:56 PM

I'm so jealous of people who work in the film industry. Thats all. And a little bit jealous of girls in corsets. I mean, I know they screw up your insides and are tools designed to conform women to male standards of perfection...but still...cool.