Thank you cake from Jacob's Well

My morning church, Jacob's Well, has been in the hiring process for a new worship leader since June, when our previous leader moved down south to pursue Seminary. And for the last two months, I've been helping out by doing all the band and audio engineer scheduling. It's a task I am well-qualified to do, given the incredible similarity to extras casting, but it's also something I find very stressful (again, given the incredible similarity to extras casting :) It's stressful because we have a limited pool of musicians to draw from, and I don't want to over-schedule people and burn them out, so there's a lot of memory work involved trying to place people far enough apart from when they last played, but also give a good mix of skills in each band make-up, and then also consider who's unavailable on certain dates, and lastly, deal with the ones who cancel last-minute (for legitimate or illegitimate reasons; judge judge judge).

Our new worship leader (Chris) started last week, so I sent him a long list of "todos" regarding scheduling (I'd already scheduled the bands out for a couple weeks, so he had a little buffer), and then washed my hands. At long last, freedom!

Sunday morning during announcements Erin (one of our keyboard players and vocalists) explained how grateful she was for Chris to be here finally, not only because she was on the search committee, but because she'd been leading the band the last two weeks and that's out of her comfort zone. Then she said something completely unexpected to me: she explained how there was one other person in the audience even more grateful for Chris's arrival than she was: me. She went on to publicly thank me for the scheduling work I'd done, then called me down front to give me a chocolate cake thank-you gift (and it was delicious!). The box was pretty special, too: everyone knows about my undying love for Taylor Swift, so Erin had written on the box, "Mr. Swift, Thank You". 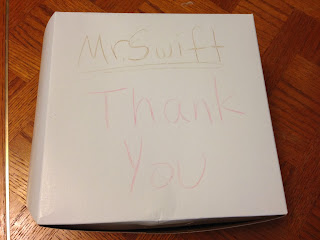 I was so touched.

At the same time I felt badly for all the complaining I'd done along the way about scheduling - to be honest I felt kind of undeserving of a public thank you after all my whining. It was a big wake up call for me that I need to adjust my attitude and start living out the Bible verse: "Whatever you do, work at it with all your heart, as working for the Lord, not for human masters..." (yes, I'm taking it out of context; I'm not sure that matters in this case).

It's not the first time I've needed this reminder. My second year in AWAKEN, I complained a lot about hauling sandbags week after week, until someone called me out about how old my whining was getting. That person's bravery to challenge me on my bad behavior caused an incredible shift in my attitude toward AWAKEN as a whole - from then on, I cherished every opportunity to haul sandbags, because I knew I was a part of something bigger than me. I need to reclaim that attitude in my life as a whole.

So, new goal for the year: even in the frustrating tasks, thank God that I am blessed enough to have those kinds of opportunities. Amen.
Posted by Jeremy Gustafson at 1:09 PM

Thanks Jeremy, good insights and reminders for us all. And we are thankful (me in particular) for how you stepped up to the plate.

And if you would like more practice taking on thankless jobs without complaining, I would be happy to find opportunities for you :)